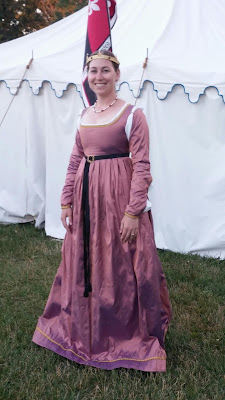 Over the last several months, I had been collecting images on a Pinterest board of women's clothing during the last two decades of the 15th century- this style is often called "Italian Renaissance" in the costuming world, which I'm okay with. However, to break it down, I would say my aim was for a 1480s-1490s gamurra (and eventual cioppa) mainly from Venice, but also with some tidbits from Florence.

I'm not even gonna lie, I adore the costumes from the Showtime series, The Borgias. Sure, they aren't super historically accurate, but the colors, fabrics, silhouettes, and hairstyles are so gorgeous that I couldn't help myself- this is where the inspiration started to convince me that I wanted one of these gowns. I started researching 1490s Italian clothing before I planned any outfit, as I knew the Borgias wasn't getting it quite right, and I didn't want to do the style incorrectly. This is not an area of fashion that I was already well-versed in. Here were some of my images I gathered for documentation: 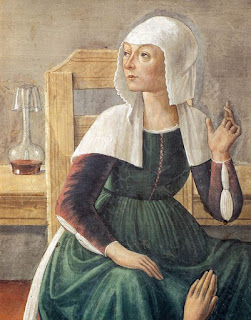 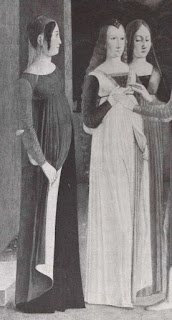 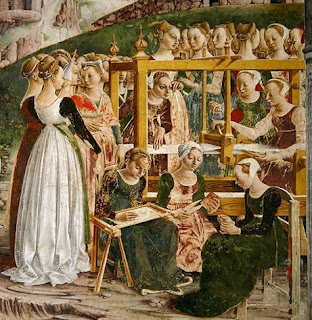 Francesco del Cossa, The Triumph of Minerva, March, from the Room of the Months, detail of the weavers, c.1467-70. 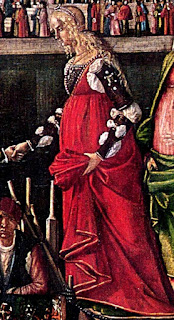 Layers required included: a camicia (Italian term for "chemise" or "smock", the underwear layer), a gamurra (supportive underdress, like a kirtle), matching sleeves, and eventually a cioppa (overgown). I have completed and worn the camicia and gamurra, but the cioppa is going to have to wait until I wear the outfit again- I already have the fabrics and pattern ready to go.

For the camicia, I had yardage of an off-white linen with gold pinstripes that I purchased from Pastiche at Uprising a couple years ago. I already had a plain white camicia, but it is so voluminous and boring that I decided to make another one. This pattern of undergarment would also be appropriate for other European fashions of the late 15th century, and I plan to wear it with other styles, which is why there is a good amount of fabric in the body and sleeves but not a huge amount like most camicias you see. Also, I just don't like having all that fabric bunching around my torso and arms. This camicia is two body rectangles and two sleeve rectangles, gathered to a neckband and into cuffs. 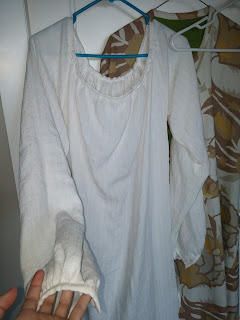 The gamurra is made from a really neat silk dupioni (almost slubless) that is sapphire blue shot with orange, producing this gorgeous pinky-purple mauve. It was tough to thread match and find ribbon to match for lacing! It is completely lined with light gold silk, giving it a nice weight and swishy-ness.

The bodice is interlined with cotton duck cloth for strength, and has a few thin zip ties across the front to keep it from wrinkling. I first tried it with no boning to be more historically correct, but the small wrinkle under my bust drove me crazy and I had to bone it just a little. It is very supportive (and was without the boning, but I hated the wrinkle) and gives a soft, rounded bust shape that I hadn't achieved yet as most of my later period styles are very rigid. I have read other costumer's research that talks about cording the bodice, but I was too far along in the construction process to cord the entire thing- it was enough of a nightmare to add four zip ties!

The bodice, sleeves, and hem are trimmed with a nice metallic gold gimp braid, that is very shiny! The skirt is about 3.5 yards of both silks box pleated into the bodice. The pleats in the front are single box pleats, and the back is double (rolled, not stacked) box pleats. This gives more pouf at the back. 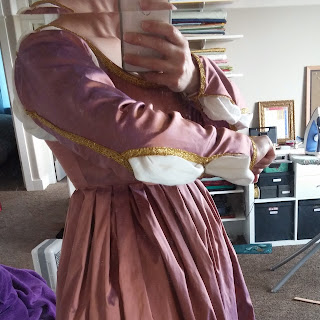 My favorite thing about the gamurra are the sleeves and the details on them. I drafted the pattern based on my usual back-of-arm sleeve pattern, but made the sleeve head smaller as it doesn't have to fit into an armscye. Then, I made the bottom half of the sleeves about an inch narrower, so they wouldn't meet and give more room for the camicia to pouf out. See the images for documentation to see the sleeve style I chose. The best part of the sleeves are these little brass findings I got from Fire Mountain Gems a while back (originally to decorate a belt). They hold the sleeves onto the shoulder of the bodice (instead of lacing), and they hold the slashed sleeve part together at the center of the slash. Sparkly! 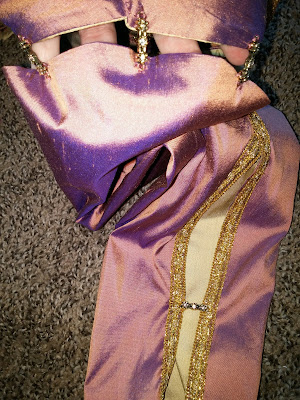 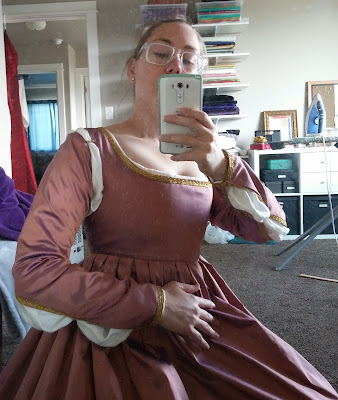 I have a cioppa planned to go with the gamurra, but I didn't want to make it to wear to SCA 50 Year because the silk for the cioppa is especially fine and likely would have been ruined by the humidity there (and I was right! Weather sucked). Pictured below is the fabric I bought for the cioppa- it is gold silk damask in an amazing floral and wave pattern. The pattern is similar to those typically found in the Ottoman Empire during this period, and the Ottoman traded fabrics extensively with the Venetians, so the pattern isn't far fetched to use for an Italian garment. The cioppa will be fully lined in a bright orangey-gold silk as the front skirts will lay open and likely show the lining. 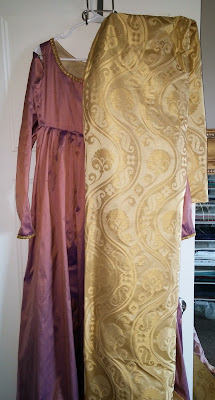 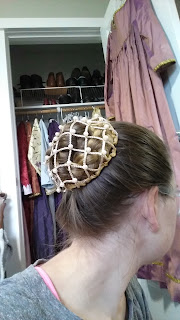 I purchased a little bun cover/mini snood from Etsy before 50 Year so I had something decorative for my hair. It's gold cord and faux pearls stitched onto a circular band. I also bought a gold corded "reta" (also called a Juliet cap) at 50 Year for future wearing of this outfit.

Here are some more pictures of the gamurra being worn at 50 Year. I just used a black silk and tasseled girdle I already had, threaded through a metal buckle for decoration. 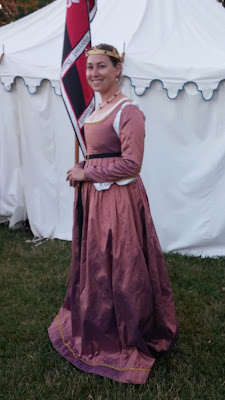 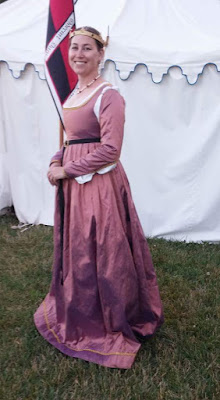