In late 2019 I set out to make my first 16th century Germanic style garment and I chose a gown in a style frequently painted by Lucas Cranach the Elder and worn primarily by the nobility of Saxony. I have previously made other garments from 16th century European fashions so I had some experience with this era. I set out to make this gown in a more historically plausible manner to challenge myself. I tried new-to-me fabrics and construction techniques which I will expand upon in this paper. 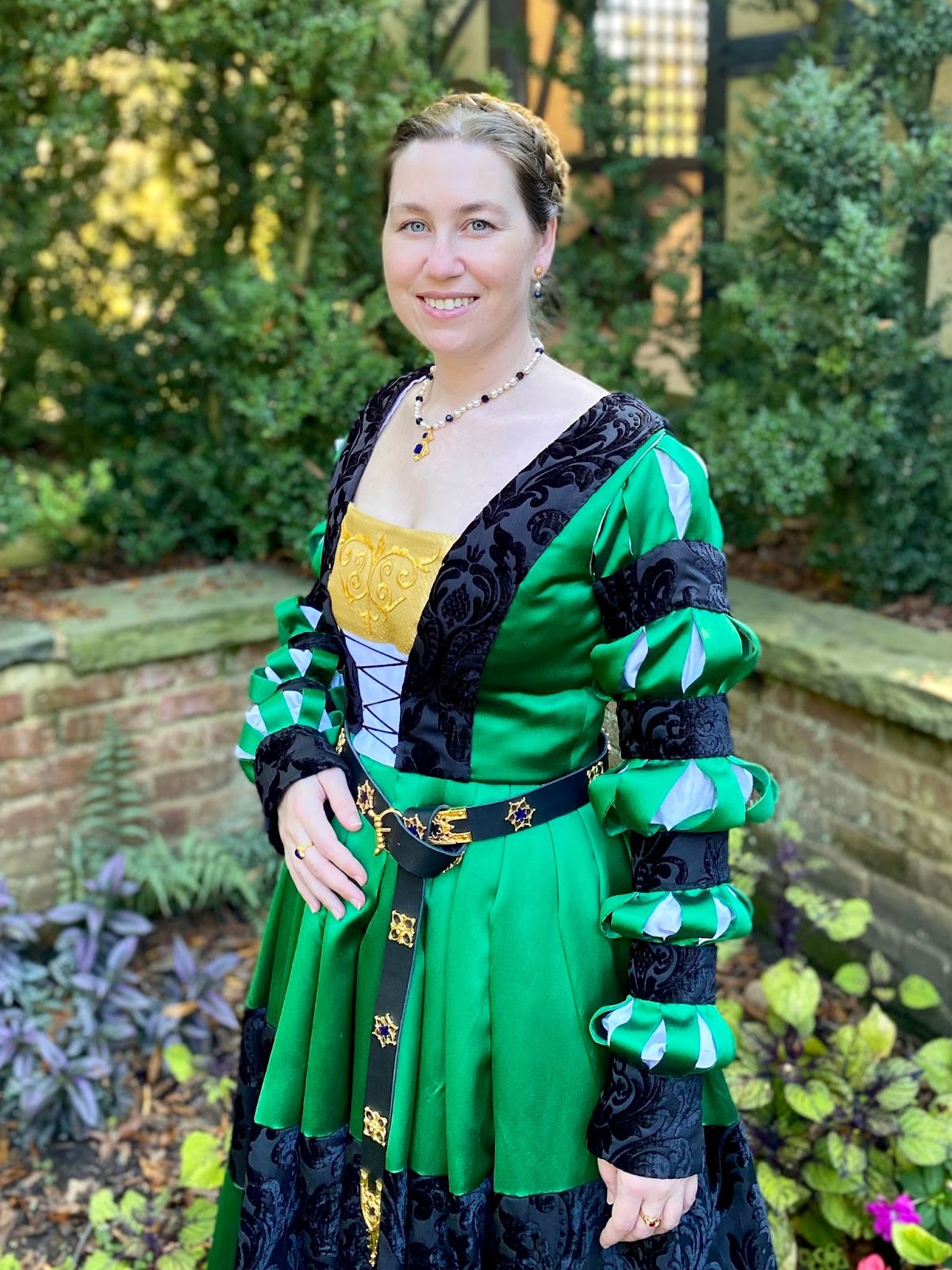 Not included in this entry are the undergarments worn beneath the gown. I always wear a linen hemd, which is the garment closest to the skin to absorb sweat and keep the wearer and the outer clothes cleaner. Mine has a wide low neckline, made with rectangular construction, and can be worn with a linen partlet over the top. Over the hemd is the optional unterkleid (what the English were calling a kirtle or bodied petticoat at this time) which provides bust support. We have evidence of these unterkleids in period imagery, either hanging in a tailor shop or on a person; however, the images of women partially undressed in the typical “Saxon” or wide front lacing gowns do not clearly show if there was a supportive underdress being worn. I posit that this may have been an optional layer to wear under this style of gown. Despite not being included in my entry, I feel it is vital to mention them in this paper as they were certainly being worn by women in this time and place and I consider them integral to the outfit. 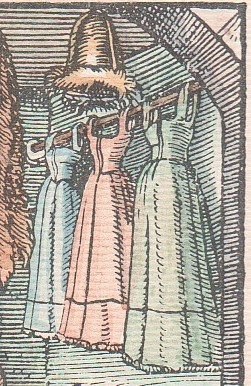 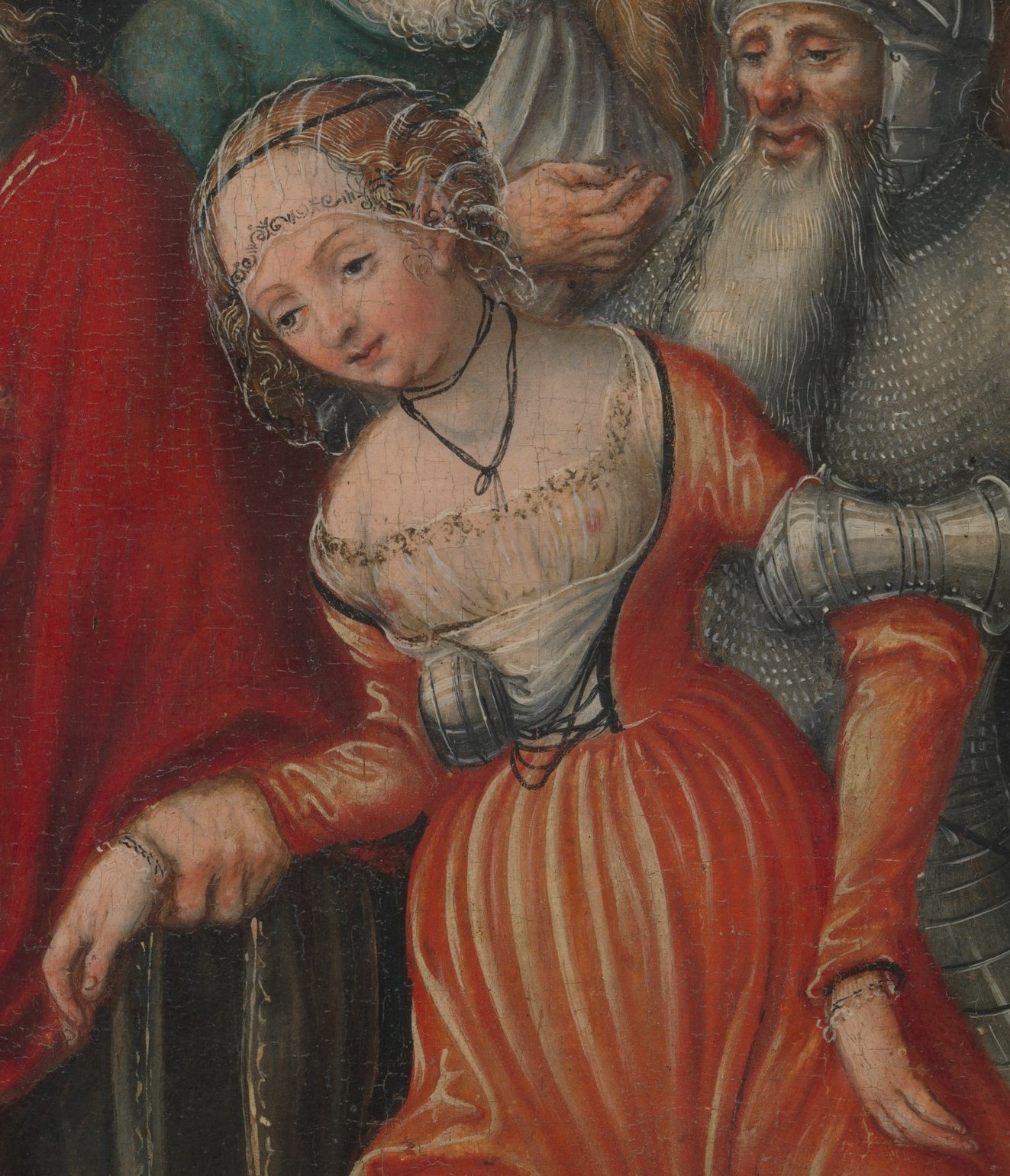 Little is known, let alone published, about how these garments were constructed. I believe that a supportive underdress, whether that was a fitted hemd or supportive unterkleid, was worn under these gowns in a daily setting to provide bust support and a smoother fit around the torso. I initially made my gown to be supportive on its own solely by fit and the lacing at the front. I find it is more comfortable and supportive with an unterkleid, and I’m not very busty. We do see almost only one body type painted by Cranach wearing these gowns- young and slim. I doubt that was the only body type wearing these gowns in period, so I think some extra support was needed, and this already existed with the wearing of the unterkleid with other styles of over gowns. Mine is made from medium weight linen with a light linen lining in just the bodice. It laces up and has zero boning. You can see that in the Saxon paintings, the gowns usually have softer lines that allow for more torso curves and fabric wrinkles, especially compared to French and English styles in the same decades. At this early stage in the 16th century, there is no evidence of boning being used inside bodices. 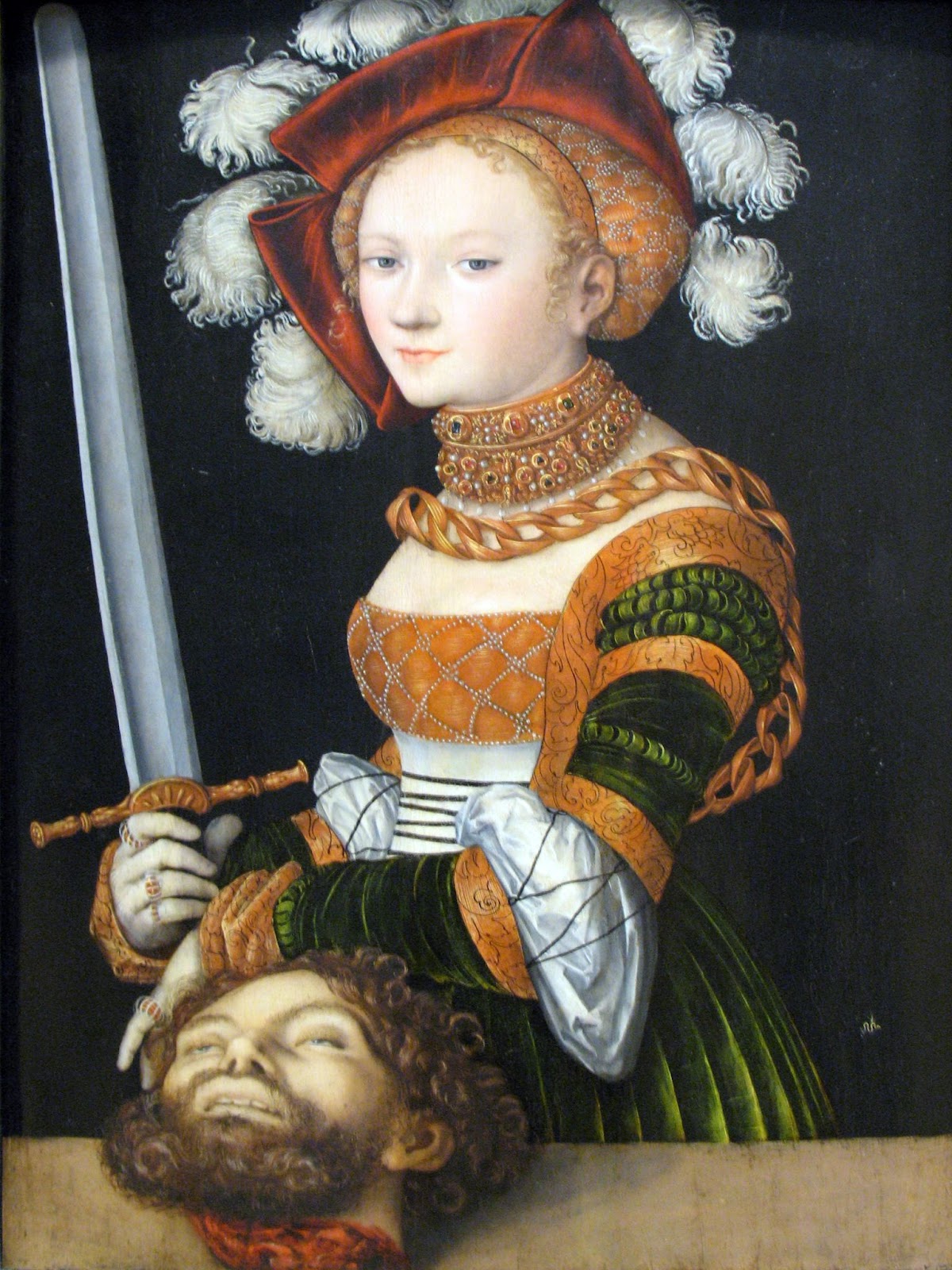 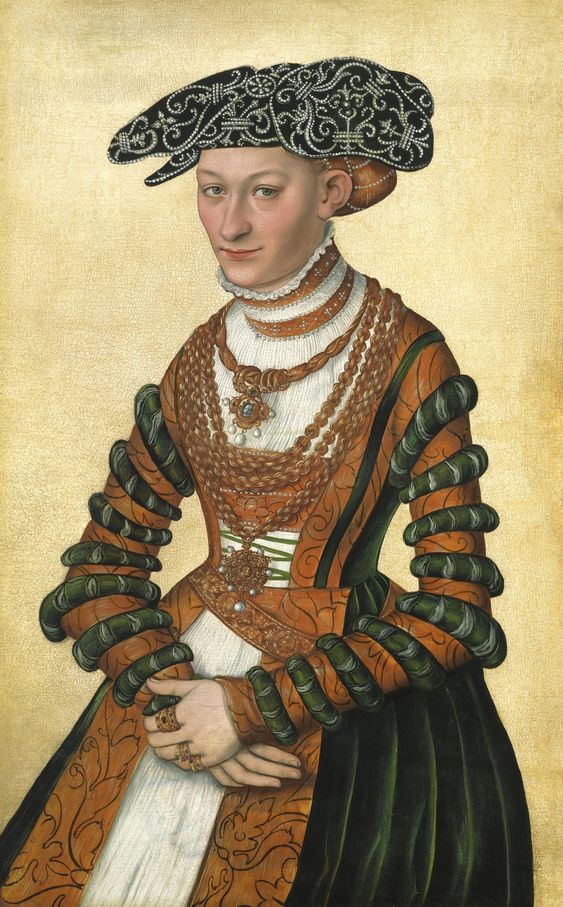 The gown is made up of a bodice with an attached skirt and a separate stomacher piece that was known as a “brustfleck”. The gown is made from a wool/silk fabric in emerald green, with black cotton cut velvet guards. Fabrics made from a wool and silk blend are frequently seen in the 16th century in Europe as described at length in “Drei Schnittbucher”; at least ten varieties with a possible wool/silk blend are mentioned and some include them used for women’s outer gowns. While the emerald green color would have been very expensive to dye, it was an available color, and green is frequently seen in Cranach paintings for gowns. The velvet guards would most likely have been made with silk (or possibly wool) velvet in the 16th century but it is very difficult to modernly source, let alone afford, 100% silk velvet. Black velvet is also commonly seen in Cranach paintings. 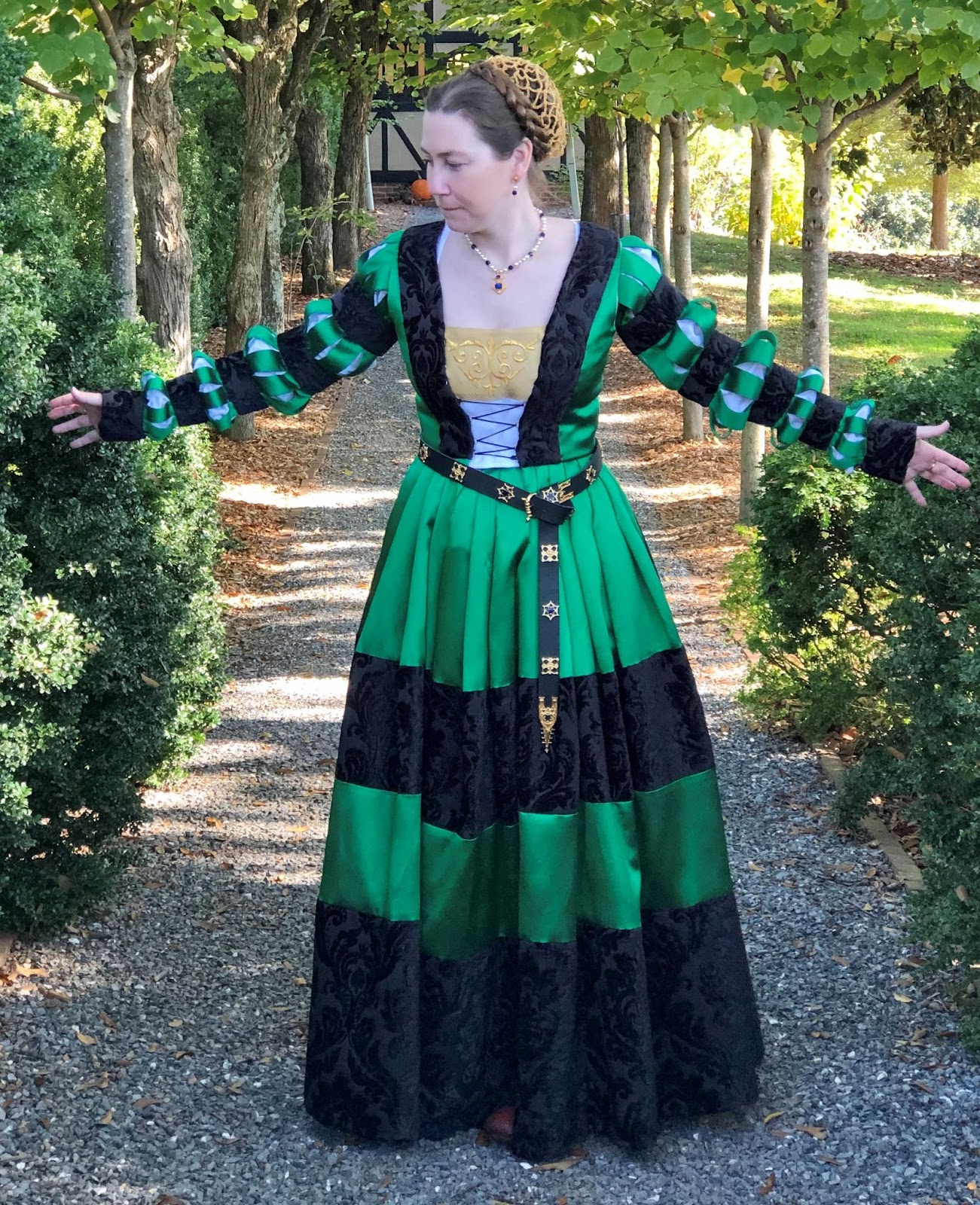 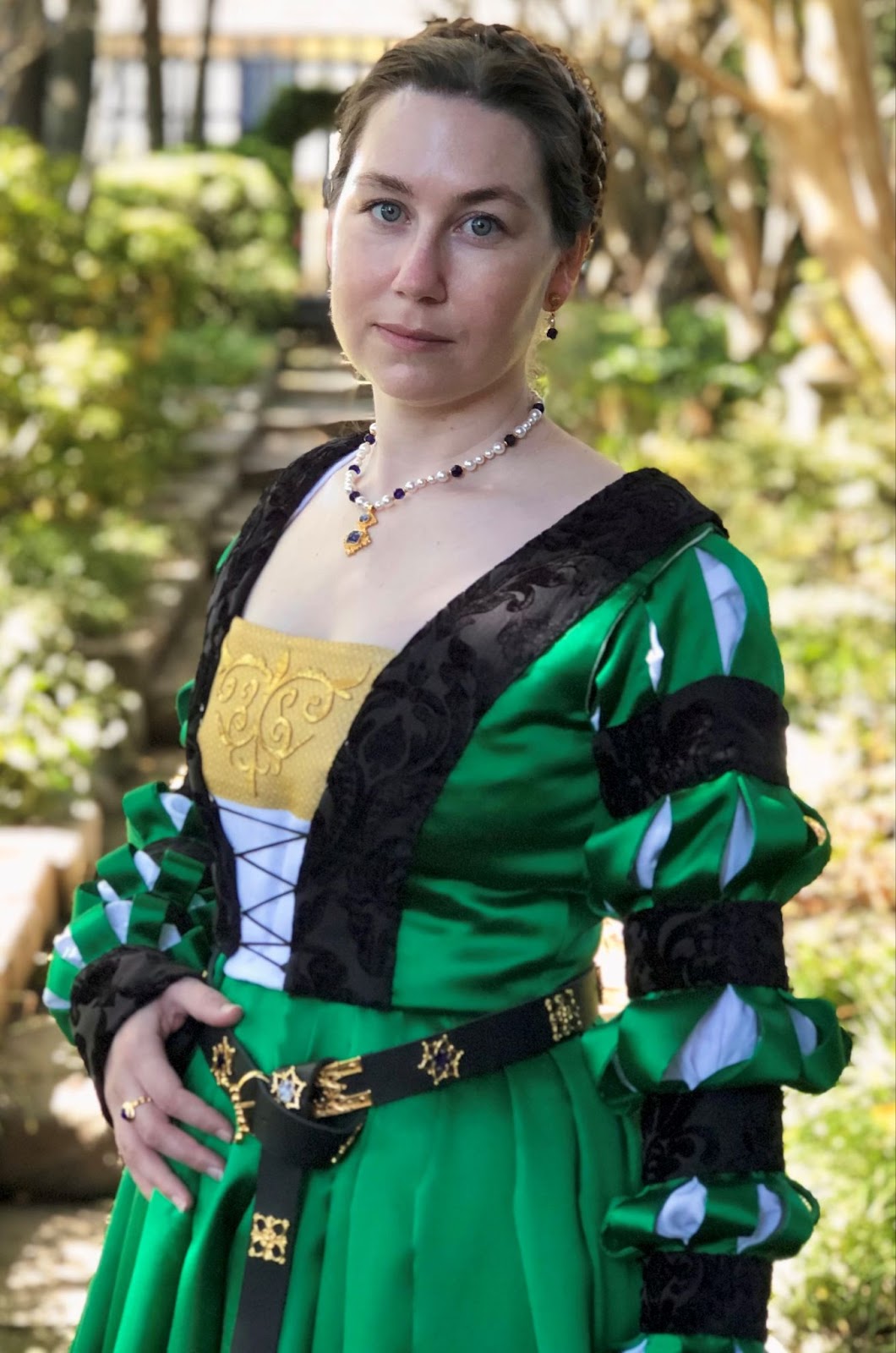 The bodice uses my basic 16th century kirtle pattern as a base and is altered at the center front to give it a wide opening. The bodice has a linen canvas interlining that has pieces of wool quilted to it in several rows of stitching to stiffen the fronts without the use of boning or cording. This is a method described in “The Tudor Tailor” book. The bodice is cleanly finished inside with a linen lining. The lacing across the stomacher is what gives the bodice support. If I were to make another Saxon gown, I would add linen buckram inside the center front and replace the quilted wool layer, but I did not have access to buckram at the time and the wool being used as a stiffener is well documented in “The Tudor Tailor”. 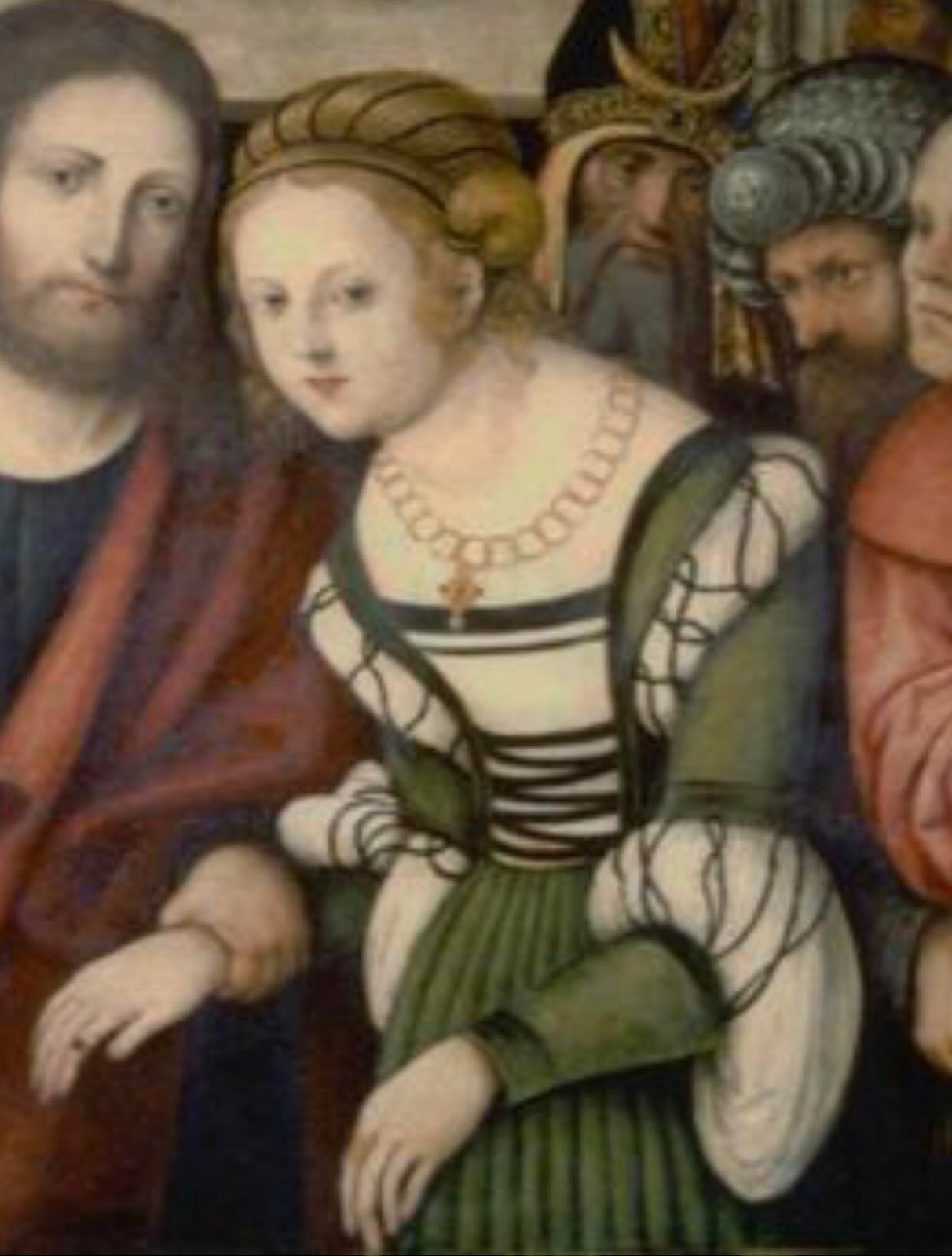 The skirt is four yards of fabric that is roll pleated to my waist measurement. A roll pleat is similar to a knife pleat, but you roll the knife pleat inside its own fold one more time to add fullness to the pleat. In order to get the effect seen in painting of this style of gown where the pleat appears to hold its shape far down the skirt, a rolled pleat is necessary. A cartridge pleat or a single knife pleat or box pleat will not keep its shape as well down towards the hem. The pleats are made by hand and then machine sewn to the bodice edge. The skirt splits in two parts in the middle to accommodate the brustfleck. I do not trust my hand sewing with the weight of this skirt to have held strongly enough so I used the machine instead.

The bodice guards are cut to match the bodice edges, then attached firstly by machine on the inside and then hand finished where it will show. The skirt guards are sewn as separate long strips- the guards are not applied on to the green fabric as that would add too much weight. The skirt guards are machine sewn on the inside with no visible stitching. To have done it by hand would have added significant time but would have been the correct way to do it in the 16th century. The hem is finished by hand. 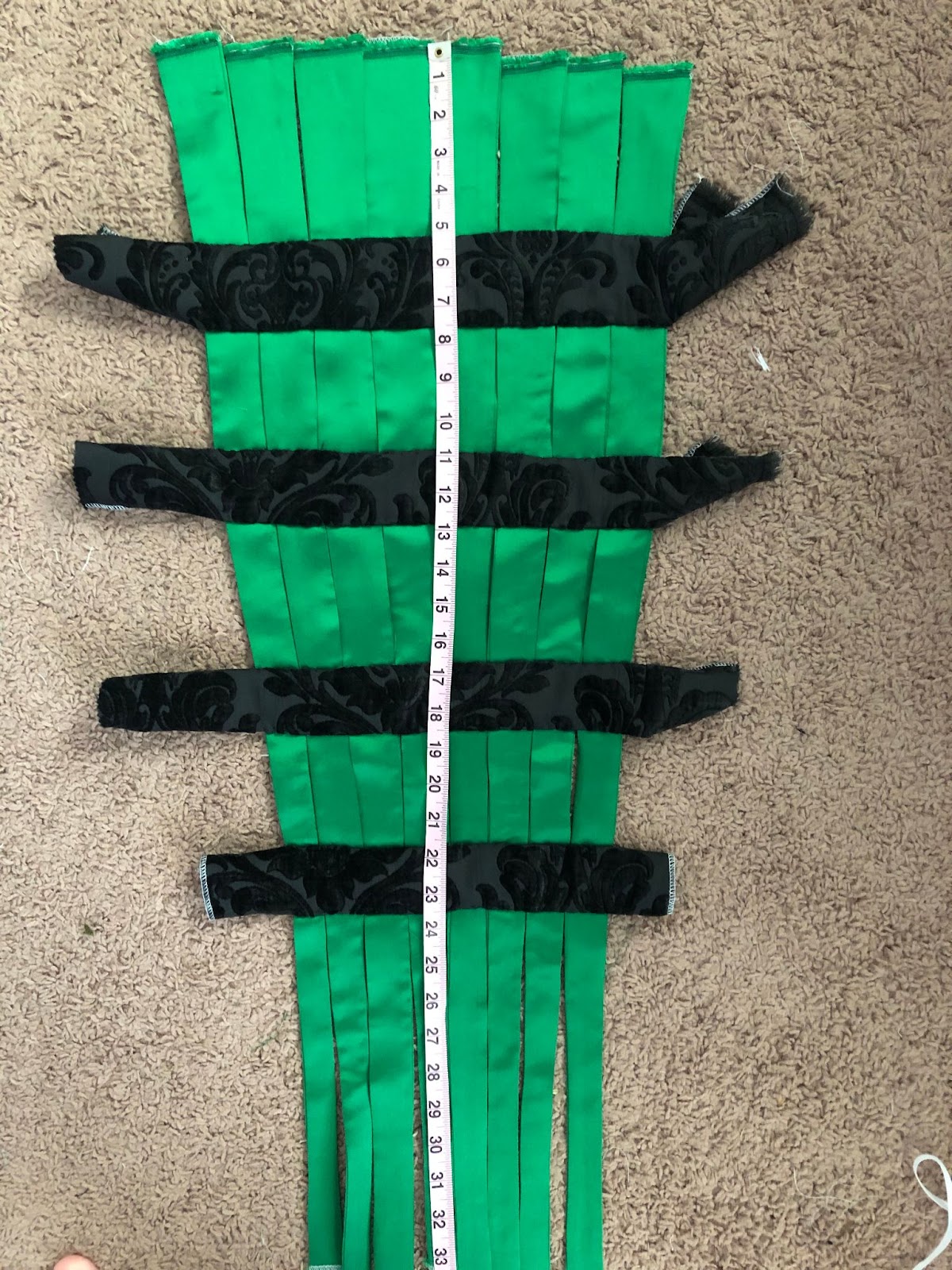 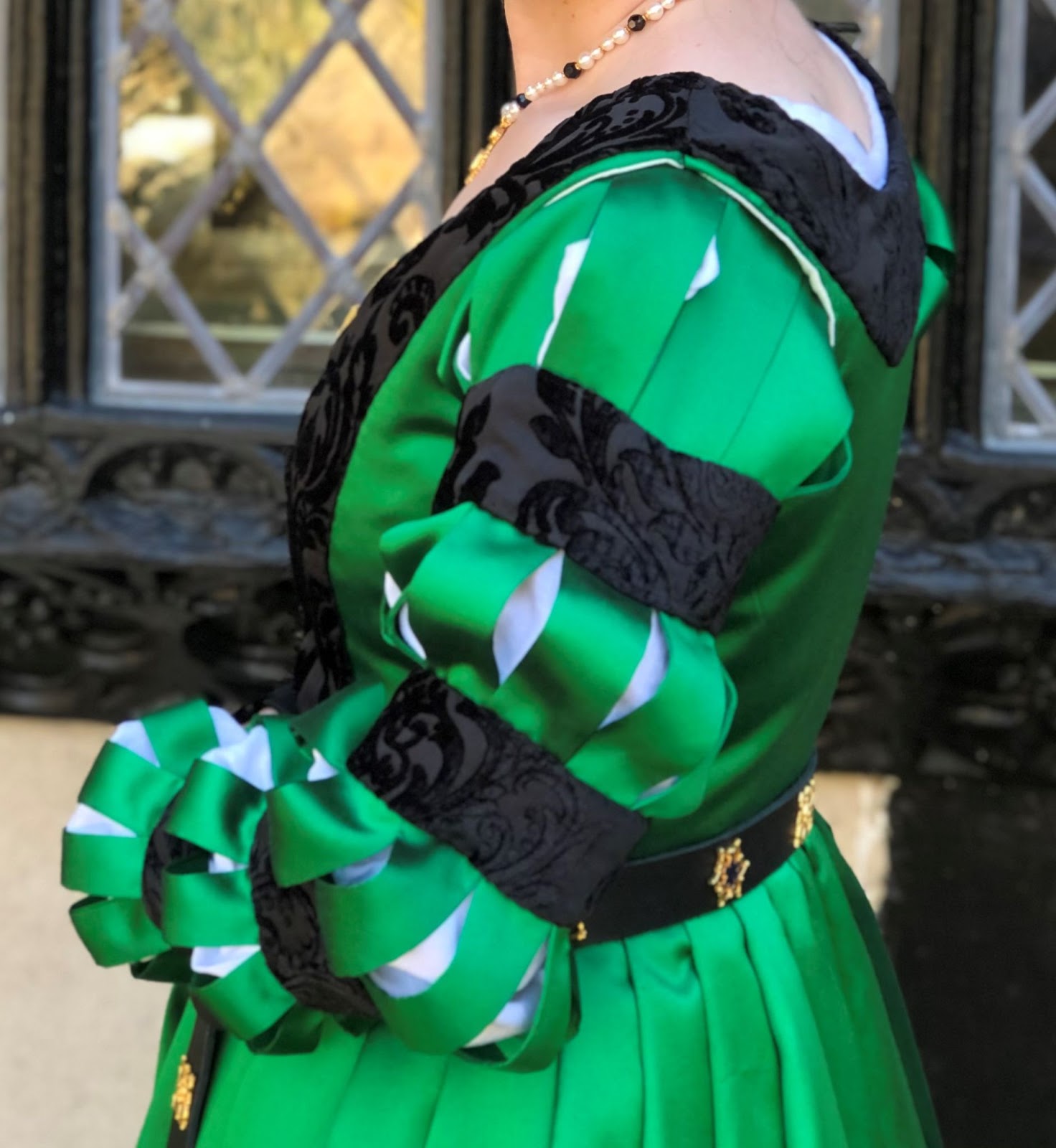 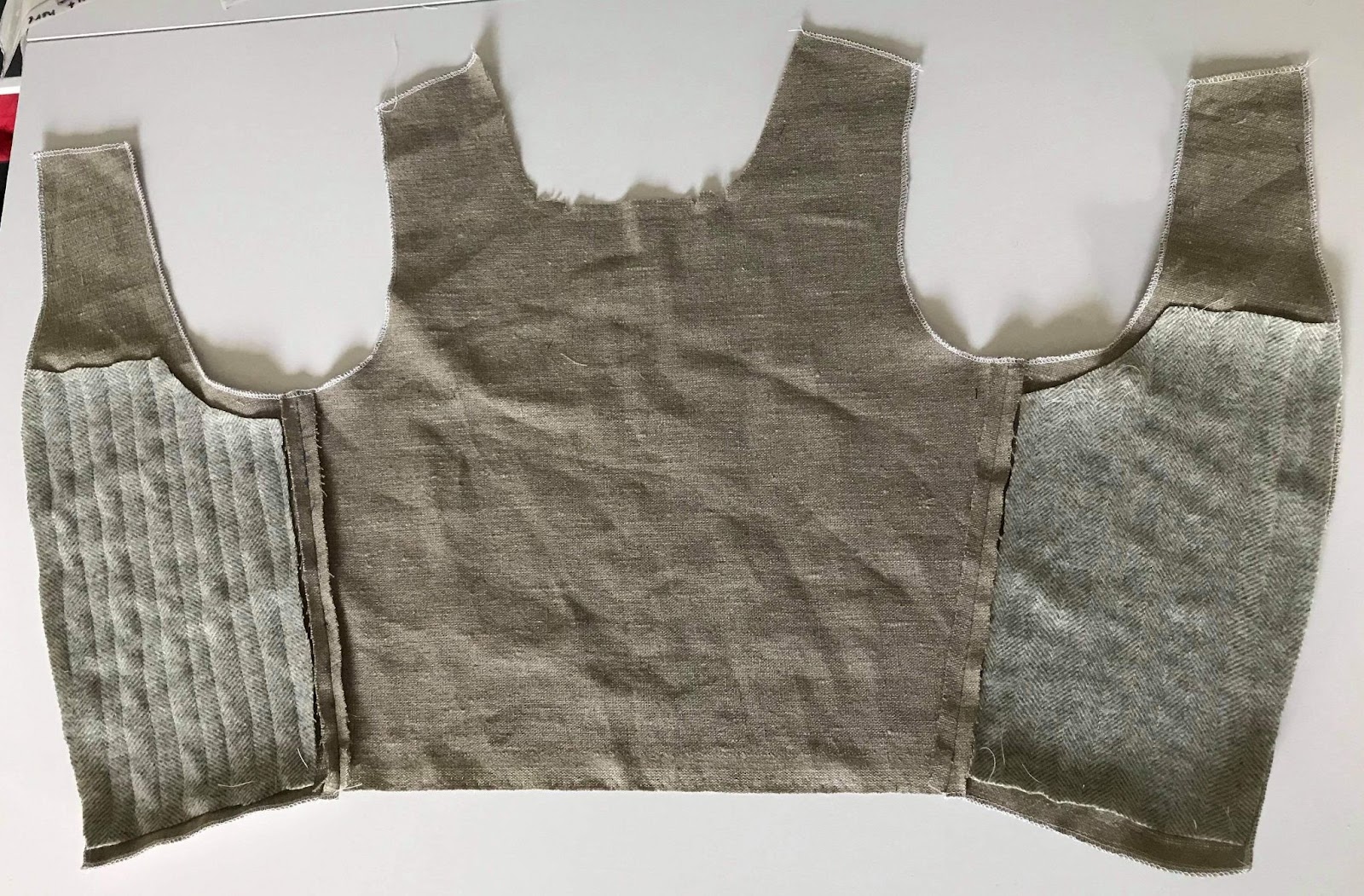 The sleeves are made from long, tapered panes of the green fabric. The guards were all applied by hand. The panes are made extra long and that enables them to pouf out on the arm when pulled on. The panes were shaped at the sleeve head and then hand sewn inside the bodice at the armscye. I chose to add small hidden twill tapes on the inside of the sleeves to keep them poufed evenly. I do not know if that was a method used in the 16th c. but without the tapes, the sleeves tend to slip and make the poufs large at the wrist and flat at the upper arm. I did not want to make a separate undersleeve from linen which is the method most people use, because these fabrics are thick and warm, and I knew I would be wearing this with a linen hemd which would provide the same effect with the white undersleeve. The tapes work wonderfully and I will use this method again. 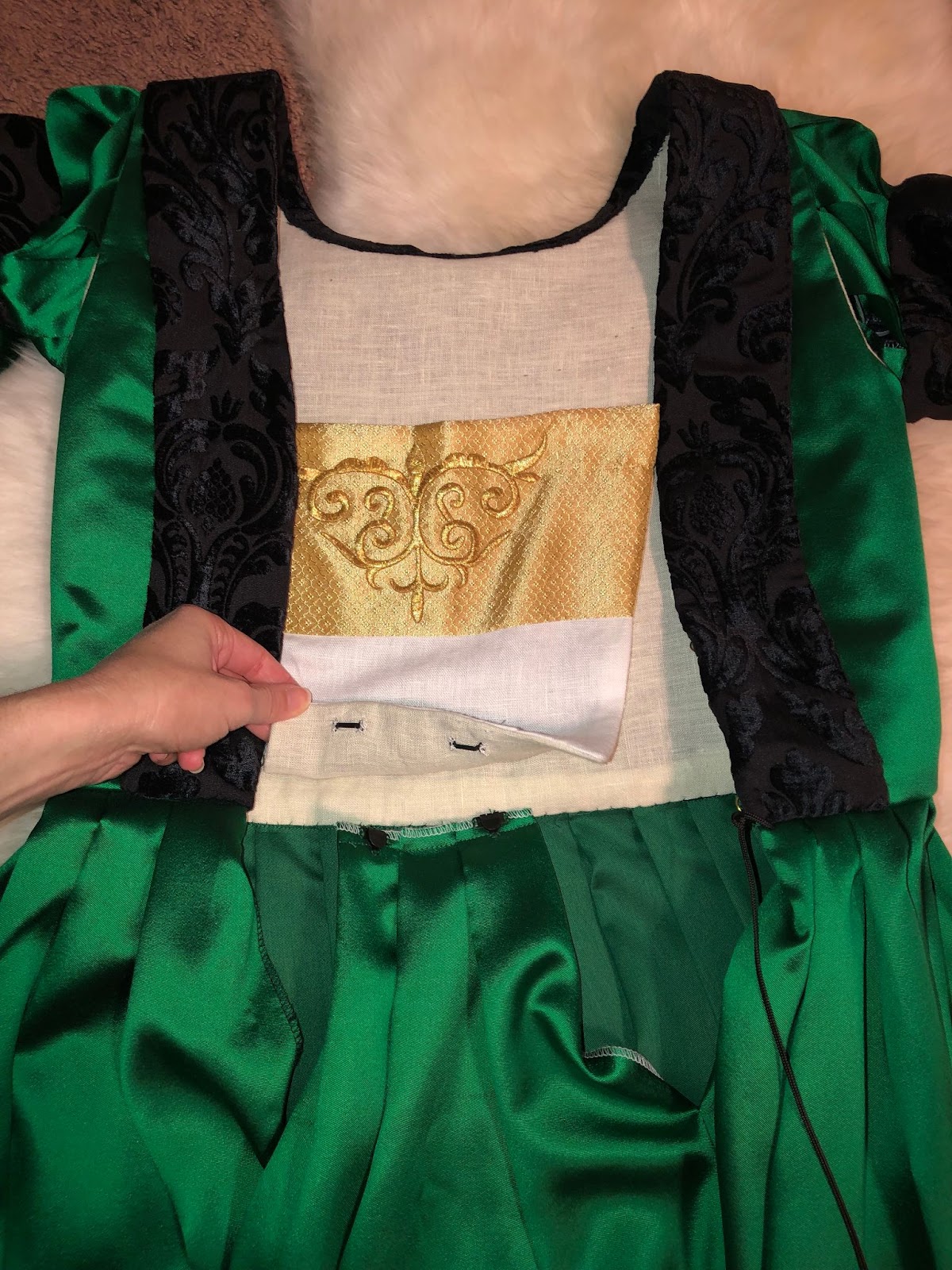 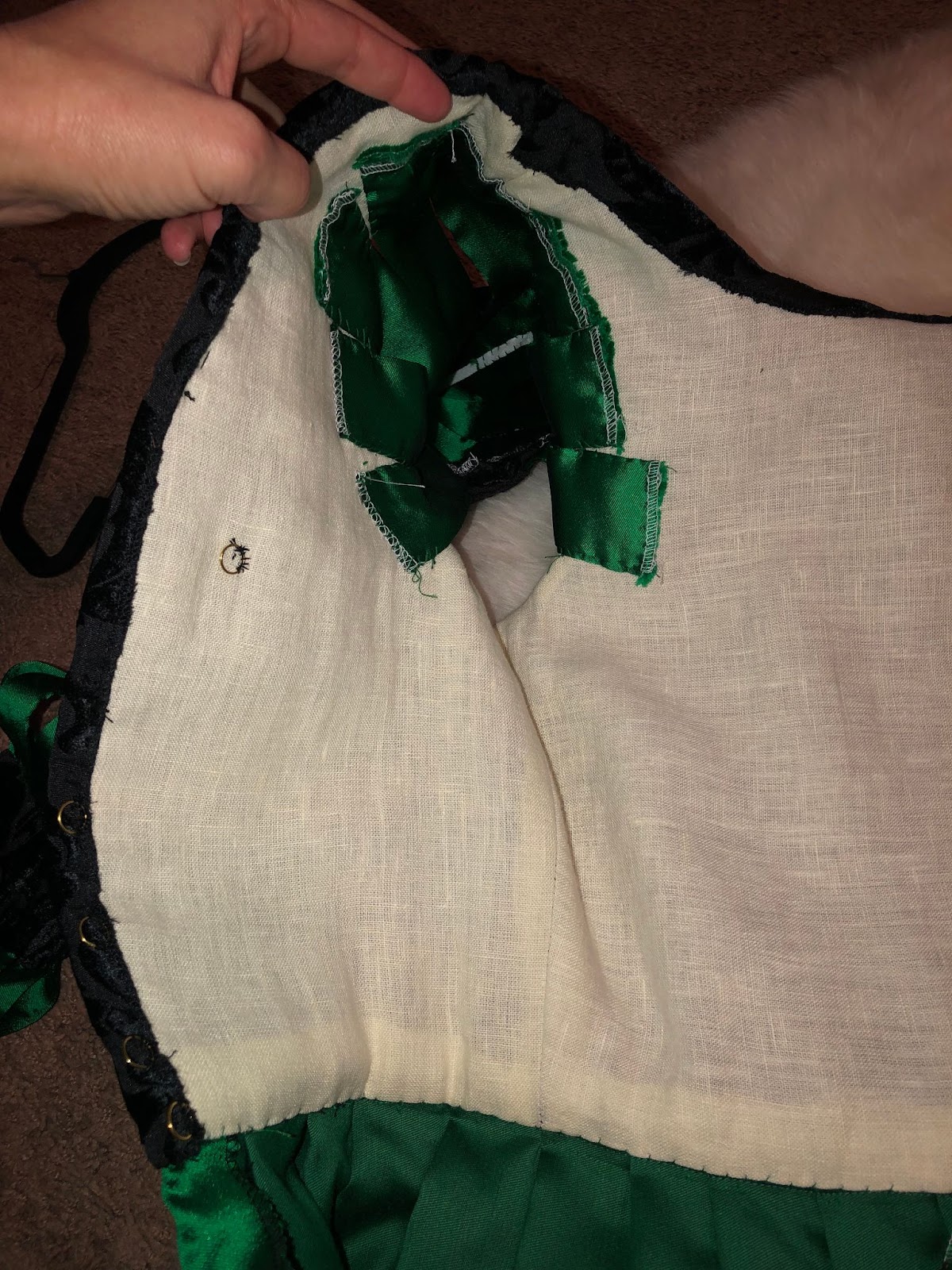 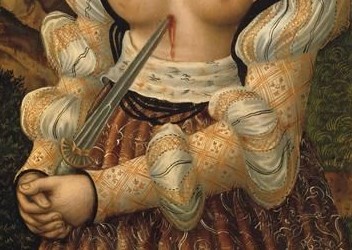 The brustfleck is another piece that I have not seen two people agree on how they were constructed and worn with these gowns. I interpreted it as a separate stomacher. In Cranach paintings that show the subject partially undressed (see page two), it is common to see a white fabric hanging around the low waist directly under where the brustfleck lays, which is why I chose an unstructured “stomacher” piece.I used linen interlining with linen outer fabric and lining, with gold silk brocade stitched on top of the white linen across the bust portion only. I sewed hooks and eyes to the bottom of the brustfleck and to the top of the skirt that sits against the brustfleck at the center front. This helps hold up the skirt. I lace the cord through brass rings sewn to the bodice fronts over the brustfleck and then I pin it to the inside of the bodice with straight pins at the very top edges. It could also have used hooks and eyes for this purpose but pins make it multi sized. I hand stitched a machine-made gold thread applique onto the gold silk portion of the brustfleck.

Overall I would consider this gown to be a mix of historical and modern construction techniques and materials. I made modern concessions with some materials (like cotton velvet instead of silk), cotton twill tape instead of linen tape, and modern-style hooks and eyes. However, there are many materials that were available in the 16th century that I did use: a 50/50 wool/silk fabric in a color seen in period imagery, light and heavy linens, wool for interlining, silk brocade and silk threads for all my hand sewing, and brass lacing rings. When I make another Saxon-style gown I plan to use linen buckram for bodice stiffening, but otherwise I would not change much of how I constructed the dress.

PUBLIC LINK TO MY DOCUMENTATION ON GOOGLE DOCS:

4.Detail from Christ and the Adulteress by Lucas Cranach, Metropolitan Museum of Art (1982.60.35)

5.Judith with the Head of Holofernes ca. 1530. Lucas Cranach the Elder, Metropolitan Museum of Art

6.Portrait of a Lady in a green velvet and orange dress and a pearl-embroidered black hat, Lucas Cranach the Younger, circa 1533-1541.

9. The Saints Genevieve and Apollonia and the Saints Christina and Ottilia, St Catherine Altarpiece in Dresden, Lucas Cranach the Elder, 1506. 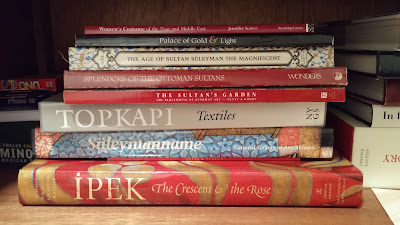