Around this time last year I started planning two Burgundian outfits, one for myself and one for my husband. We knew we would be attending Twelfth Night in January 2016 at a venue in Salt Lake City that I remembered from the year before as being a rather chilly site- it's a steel building with concrete floors, and even with the heat on, that space doesn't get as warm as I might like. I think it's fortuitous though, to be able to have sites that aren't blazing hot indoors, so we can wear heavier clothing more like what they had in the Middle Ages.

These outfits were completed back in early January, but I didn't get any good pictures of them when they first got worn, and the in-progress pics of the outfits looked lousy. We had a local SCA dinner just recently, and we were able to wear the outfits again, as we chose "historical Halloween" as the theme- we were going for dark and gothic with the clothes. 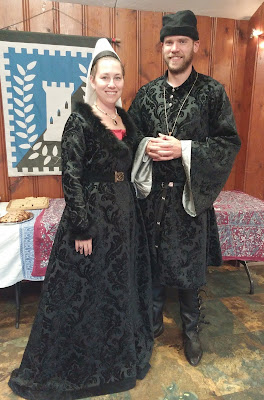 The fabric for the outfits is a black-on-black velvety chenille, from the LA garment district. It's extremely heavy, soft, and flowy, and sheds like crazy when you cut it. I had to immediately serge the fabric after cutting it out, or it would fray severely.

My gown is lined with black linen on the body pieces, unlined in the sleeves, trimmed in black fox fur at the neckline and cuffs, with a black velvet guard on the hem. The belt is velvet with a buckram interlining to keep it sturdy, which works very well. The buckle is from Raymond's Quiet Press. The red fabric at the chest is silk damask, sewn into a trapezoidal panel and pinned at the neckline to stay in place. It is more likely that a full kirtle was worn underneath these types of gowns in the 15th century, but I opted for comfort with the simple panel. I could easily wear this gown with a kirtle though, as it is quite roomy and is held in at the waist with a belt. 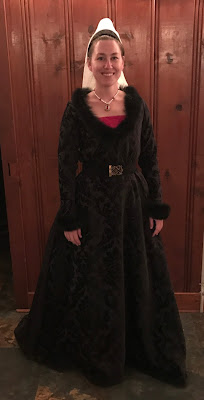 The pattern for the gown is essentially the pattern in "The Medieval Tailor's Assistant" for a late 15th century flared gown, but I narrowed it at the waist and bust a bit so as not to have too much extra bulky fabric up top. If I make another gown in this style, I would cut the neck lower, and take in the top part even more around the upper torso- I prefer the look of it being tighter up top and then flaring from the natural waist, not the upper chest.

The hennin is a recent addition, finished only last week for a different 15th century project. I plan to write about the new hennin when I write about the gowns it goes with, but for now I'll describe it briefly. It's buckram with a wire wrapped around the bottom edge, with felt padding on the inside and outside of the buckram, black silk brocade covering the top and black silk taffeta as lining. It stays on easily: I put my hair in a bun at the top of my head, and use two 5 inch stick pins pushed through the sides of the hennin, and the pin goes into my bun. I was able to dance and the hennin didn't slip around (though in these pictures, I notice it leans a bit to the left! Must check that later). I pinned a 45" square silk chiffon veil over the top for a grander effect.

My husband's gown is also from a pattern in the "Medieval Tailor's Assistant", the later period flared gowns. Basically, it's fitted in the shoulders and neck, then flares out from the underarm to be the full width of the fabric once it reaches the hem. It's belted at the waist to contain the folds of the fabric. The sleeves are lined with silver silk, and it has Fleur-de-lys buttons at the neckline, where it opens just enough to slip over his head. It has a collar about 1.5" tall, and the sleeve flare out from the elbow- again, a pattern from the Medieval Tailor's Assistant.

He is wearing a wool 15th century hat from Revival Clothing, knee high boots from Boots by Bohemond, and a fancy leather belt from Lorifactor. 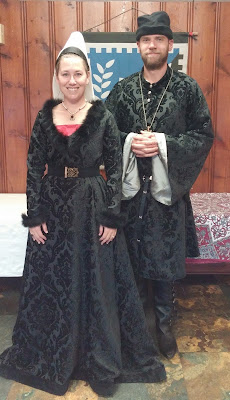 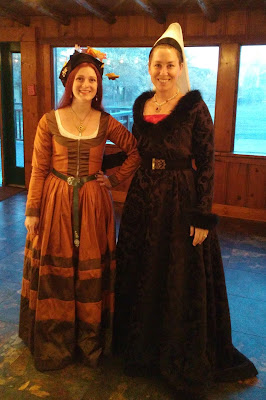