This July I attended my first Jane Austen Festival in Louisville, Kentucky. The event was great, the site and grounds were lovely, the ball venue was spectacular, but it was crazy hot. Heat indexes over 100 hot. It rained a bit Sunday but that just made it muddy and moist. Anyways, on to what I wore! 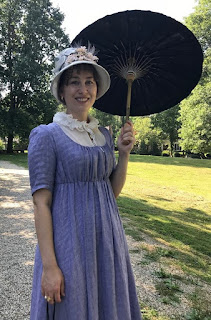 In June I made a new drawstring dress for a 19th century fashion show. It's linen in a plaid weave. I used the Sense & Sensibility Elegant Ladies Closet pattern. I definitely think that the linen dress and linen shift underneath helped me be slightly less hot than if I wore all cotton instead. 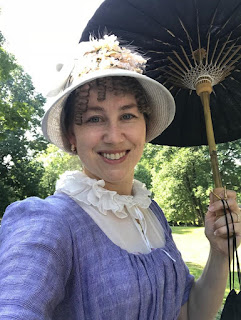 In my new Shocking Bad Hat I bought at the festival, in silver with lavender and pink accents. 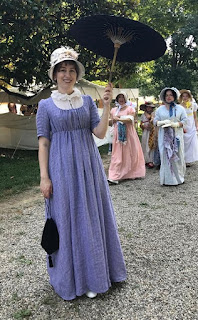 For the fashion show in June, I deliberately chose to do a working class style to show the range of clothing and classes during the early 19th century. I made a apron from a black and ivory mini-check linen from Renaissance Fabrics. The neckerchief and cap were made last year for my 18th century outfits but worked well with this outfit too. 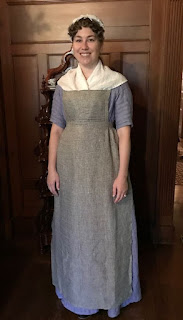 The ball at the festival was held at the Pendennis Club in downtown Louisville. It was a fantastic venue, with a dinner, ball, card room, private salon rooms, ladies lounge, etc. Very grand indeed! I wore my silk ballgown for only the second time. 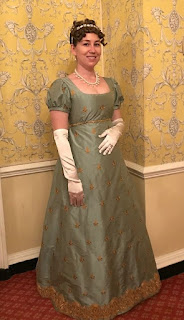 On Sunday at the festival I wore my new blue dress. It's hand block printed, from an Indian Ebay seller. I used the Laughing Moon bib-front pattern, adjusting the front skirt to gather up with the bottom of the bib for a fuller look. The sleeves are also narrowed. It closes with Dorset buttons. This is my favorite Regency dress I've made so far. The black bonnet below is also a Shocking Bad Hat. 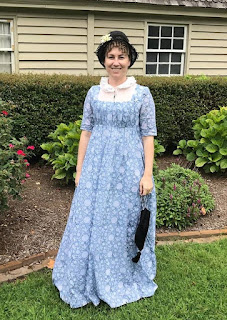 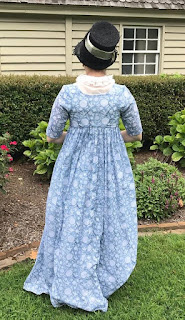 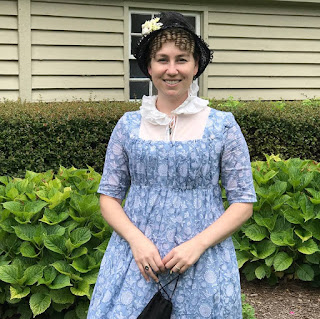