Fixing Up the Blue Florentine Sottana- Again! My 50th Post 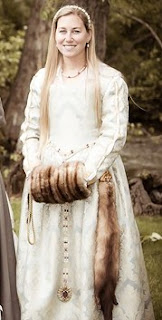 Oh, this dress, how many times can I alter it?! I first completed this dress in January 2012 for the Artemisian Costume Challenge. It was my first foray into 16th century Italian costume. Read the first post about it here: Original Florentine

I have quite a few friends in the SCA that are wonderful seamstresses, and they have told me they don't like to fix, repair, or alter older garments- they just like to make new ones. For me, I have found that I really like to fix up my older stuff!

I was very proud and excited about it when I finished it. Let me tell you what I decided were problems with this dress about a year after completing it.

The first two pictures on this post are of the original gown, the third picture is of the first fixes, and the last picture is how it looks now.

#1 biggest issue: the bodice was too big! I don't know if I dropped some weight (very unlikely) soon after making it, but it's more likely that it was always too big, and seeing as this was my first time doing side lacing, I may have thought the fit was just "different". It did not support my bust, nor tighten enough at my waist to pouf out the pleats properly, the shoulder straps were too wide

So what did I do? I first tried to take in the original bodice by cutting off the old eyelets, making seams there, and sewing new eyelets. It was way too small now! There wasn't a chance of it working. So, whole new bodice it was! I had plenty of fabric left over. I believe I unpicked the skirt, laid out the old bodice onto paper, traced around it, and took it all in about an inch. I think I made the neckline a bit lower too.

Here she is after the first fix, I think in 2013. New bodice, skirt reattached, straps working better. I left it like this until June 2015, when I wanted to wear it for court at an outdoor event. This gown has become my fancy dress for dirty events, because it's polyester fabric and older than my other gowns, so I don't care what happens to it.

June 2015 rolls around, and I decide I can't stand to wear it unless I fix it up. My current sewing skills are not well-represented in this not-so-well-made gown.  So, here's where the last changes were made:


#2 issue: the sleeves were different lengths! Yep, apparently I didn't notice this for about two years! The right sleeve was a whole 1.5" longer than the left. I wanted to be lazy and leave it alone, but I just couldn't- I sew too well now to be that lazy! So I took off the lace on the right sleeve and shortened it at the cuff, then reattached the lace. I had to move some of the buttons around too, to make them seem even.

#3 issue: the skirt was too short to wear with a decent petticoat. When I first made this dress, I wore it with a plain gold silk petticoat, gathered to a waistband. This petticoat basically did nothing to give the skirt any pouf. Once I made some proper petticoats (one damask and one corded), I put them under this gown, and the skirt was now hemmed too short. So, I unpicked the hem and lengthened it all, especially around the sides.

#4 issue: the neckline of the gown. Even after remaking the bodice, the shoulder straps were uneven and the neckline too high. I realized I was looking too matronly in this gown, and I'm not even 30 yet. So, I removed the stitches along the front neckline (where the shoulder straps attach), made the neckline probably an inch lower (which meant cutting down the boning too), and reattached the straps a bit tighter.

#5 issue, which has made a ton of difference, is a proper Italian camicia! Up until a few months ago I had always worn this gown with an English smock. Obviously this is a huge no-no, but I didn't think I would wear this gown very often (when I first made it), and I figured it wouldn't really matter because I had the fake sleeve poufs. No more! I refused to do any more short cuts. I acquired a camicia, tried the whole thing on, and was so pleased with the results. Now it all looks great, and I am happy to wear this gown again! The fabric has held up really well, now and again I have to re-sew some buttons that pop off, but in general, this is a very durable gown.


Since the last repairs, I have worn it twice- at Uprising in June and at Pennsic in August. Here it is!