At the end of August, my husband let me know that he wanted to try a different era of costumes. We decided to give 14th century a try for him, and when I started doing research for men's clothing, so much of the women's also caught my eye. I decided to make some new garb for both of us in September and October to try out and see if it was a good fit for us.

Let's go back to May, and my first foray into 14th century. I decided to dye my white kirtle purple because every time I wore it, I felt like I was wearing underwear out in public. Even a red sideless surcote didn't seem to help. I much prefer it the fun color over the white but of course it's a bit warmer to wear now.

Here we are at Crown Tournament on October 3. I'm wearing my purple kirtle with a hood purchased at Pennsic from the Hooded Hare- it's grey wool lined in purple silk. My husband is wearing a new hunter green wool cotehardie with his new hood, also from Hooded Hare, in dark grey wool lined in black linen. I made him the cote and the white linen under tunic. The black wool hose are from Historic Enterprises and they are glorious! I highly recommend them. 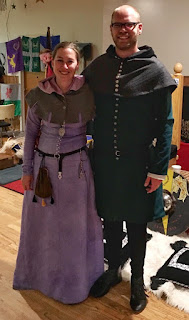 My first 14th century kirtle is okay. Here's some issues with it in case you want to hear all about my mistakes from the first go around:
1. Not full enough in the hem. There's maybe 88 inches at the hem.
2. The lacing isn't spiral- while that's documentable, it doesn't lace up as well as with spiral lacing, and it causes some gapping.
3. The sleeves have a seam under the arm instead of going down the back of the arm.
4. This kirtle doesn't shut over my bust, even without a bra on, yet the linen is also so stretchy once I get warm that it feels loose and doesn't support me.

So knowing what I wanted to change and make more period correct for the next kirtle, I got started with the Medieval Tailor's Assistant. The kirtle pattern in this book lays it out on the full width of the fabric, with no gores at all. My purple kirtle is three rectangles (two front, one back) with side gores, and it works, but leaves you with a small hem width. With my fabric being 57 inches wide, after sewing I've got about a 3 yard wide hem on this kirtle. Before I started cutting, I needed a body block. 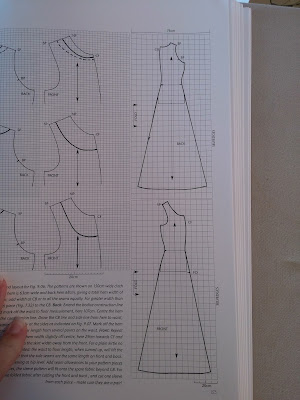 The body block I drafted is based off my purple kirtle because it fits so snugly. I just laid down the kirtle, pinned it to the floor, and put wax paper over the seams and drew on the lines in marker. I added some room in the bust and shaped the back panel to have a seam (my purple kirtle has no back seam and it wrinkles at my lower back). The waist fit fine so I left that alone. This pattern has the center front on the straight grain- lots of people use a curved front seam (I've done it for a friend), but I am not well endowed in the bust department, so I seem to get away with a straight front. However, I haven't tried the curved front yet so the best method remains to be seen.

Here's one secret, though: I patterned this kirtle to be worn with a light sports-style bra (kinda like a training bra, just cotton with skinny straps, no padding or cups, and they are crazy comfortable). Blasphemy, I know! However, like I said, I'm lacking in the bust, and even though I can get away with no bra, I need a bit of padding so I appear to have something up top. My later period styles don't have this issue but it seems that no matter how I pattern my 14th century kirtles, the bust looks tiny. I have plans to do a fitting with someone more experienced than me on Gothic Fitted Dresses in the future, but this is what I've tired so far without any help. 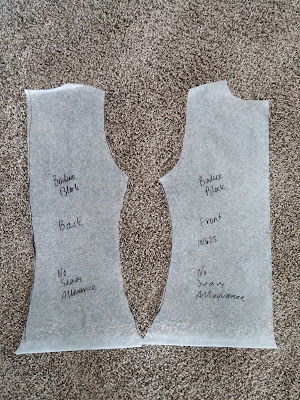 The fabric I chose is a seafoam green lightweight wool flannel from a wool store in my city (yes, we have a wool store!). The kirtle is fully lined in white cotton. You might be aghast and say "why cotton?! You should have used linen!" And while linen would be more historically correct for this use, I picked the cotton because it's the same width as my wool (60 inches), so I could cut the patterns together without piecing the lining. They both even shrunk the exact same when I prewashed them. 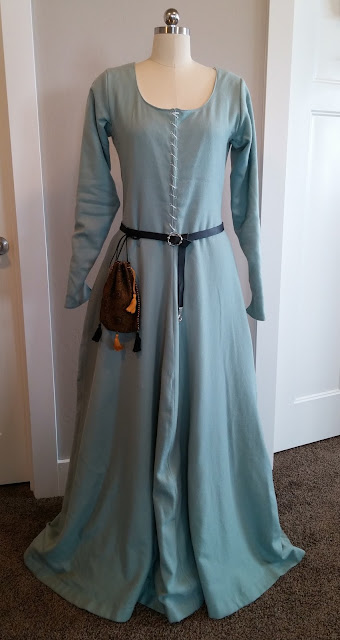 This kirtle has spiral lacing with tiny hand done eyelets. The buttons are from the same wool and they are about 1.75" around, sewn by hand and put on with strong thread. There are only 5 buttons on each side now but I plan to add a couple more after I wore this for the first time last weekend. There are mitten-style cuffs that can be turned back while working. To get this style of sleeve you must have a seam that goes down the back of your arm, not underneath. I had patterned that style of sleeve earlier this year so I adjusted it to fit this armscye. This hem is much fuller and I prefer it. 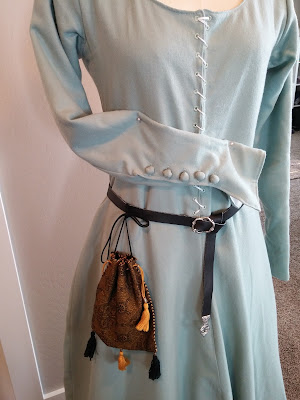 My overall opinion of this kirtle is much more positive than my first attempt. I wore it all day at an indoor event and was the perfect temperature throughout teaching, numerous stair climbs, and running around. Turns out this kirtle is a bit loose in the waist, and I may take it in an inch. I will likely make this kind of garment again, especially as my husband and I are diving farther into 14th century. My next project is a 14th century silk brocade gown for a court event next month and it uses the same body block but is a bit different. Expect a post on that in a few weeks.