SCA 50 Year Celebration is coming up in a couple weeks, and I've been prepping for it over the last couple months. I'm the type to make a list of outfits that I plan to wear each day of a camping event, make sure I have enough underwear, kirtles, gowns, warm layers, etc. I generally wear two outfits per day when at a camping event- one light layer for daytime and one fancy and warmer layer for night-time. I wanted to be sure that I had plenty of kirtles for 50 year that I wouldn't need to re-wear any of them, so I needed 5. I already had a periwinkle linen front lacing kirtle (the first one I ever made, which is on its last leg, but could do another event or two), a gray linen pull-over completed in February for Estrella War, and the teal linen front lacing I made back in February, and wore to Estrella and Coronation (love that one!).  So I made two more this Spring in preparation for 50 year.

First up, a side lacing kirtle in purple and cream pinstriped linen. This one turned out rather pretty with the neat fabric. It has 12 eyelets that spiral lace up my right side. The pattern is my basic body block with four gores. I apologize for the mirror selfie, but I don't often take pics of my "casual" garb all trussed up- I'll get some shots at 50 year when the ensemble is being worn! 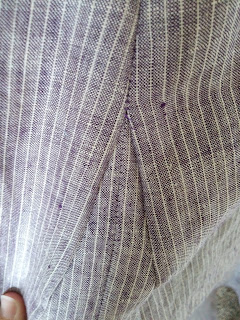 Here's the detail of the back gore- all nice and lined up! Plus you can see the nifty fabric.

Here's the gray linen kirtle I made back in February- I have no other pics of it because it's rather boring! It's my body block pattern with a big seam allowance and some shaping taken out of the waist, so I can pull it over my chest and not deal with closures. It's very comfortable and a dark enough color that I can forego the undergarment if I'm running low on clean smocks at a long war. 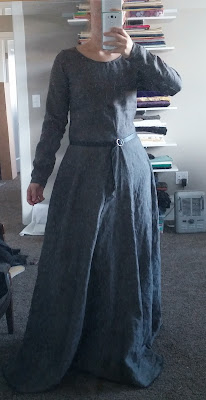 And now for the most recent one I've made, the black linen. I had bought 10 yards of black linen/cotton to line some black damask garments I made back in December for me and my husband. I had a bunch of the linen left over, so I made the kirtle from it, and I have enough that I could make a tunic for the husband later on.

Again, basic body block pattern, spiral laced eyelets up the front. Shown with a white lacing cord for these pictures so you can see how the spiral lacing looks. Sleeve pattern on all of these kirtles is side-back seamed. I typically don't do the side-back arm buttons on my linen kirtles, because these guys get washed a lot, and they aren't meant to be fancy- they're about as close to peasant garb as I will get, so no embellishing, just practicality. I save those buttons for the nicer kirtles and gowns.

I finished a white wool hood last month that I plan to wear at 50 year. At Estrella back in February, it was in the high 80s all week, and very sunny, in the desert. I wore hoods with my kirtles for a good bit of my day, and it really helped me avoid sunburn and stay cooler. I wanted to have one more neutral hood for 50 year to keep me sunburn-free (I have a history of skin cancer, and sunscreen just isn't enough to keep me from burning). Plus, who doesn't love more accessories?

This is made from a very light wool from our local wool store in Bozeman, and lined in cream white silk dupioni to make it a bit fancier than my pink wool hood that's lined in linen. I toyed with the idea of using metal buttons for the white hood, but ultimately decided to make self-fabric buttons to keep it extra-neutral (I can't stand mixing metals, and I have belts with gold or silver fittings and cotes with gold or silver buttons). The pattern started from the Medieval Tailor's Assistant, but I had to make significant changes to the one I made for the pink hood- my shoulders are apparently huge while my  neck is not! So, bigger neck gussets and a narrower neck opening. 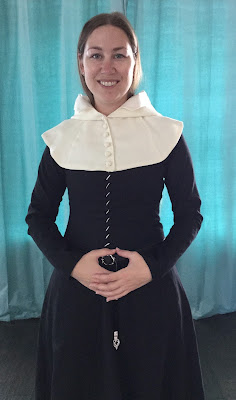 I love how it looks with the black kirtle! 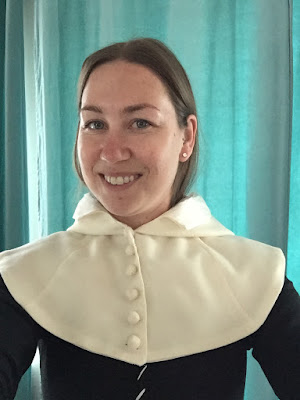 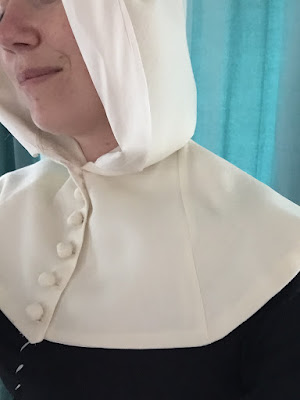 Here's a shot of the big gussets and the buttons. 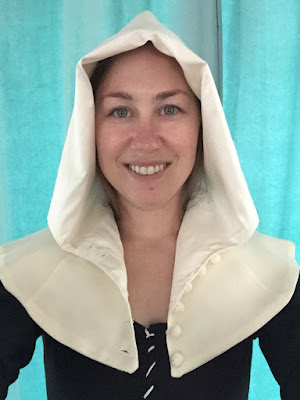 Hoods look cute worn open, too. I may add a liripipe to this hood later on, as the pointy back tip is just... too pointy.
Posted by Jane at 6:23 PM