Projects and Plans for 2017

Seeing as I wrote up a post about my completed projects from 2016, I figured I would do a post about projects that are in-progress or on the list to make in 2017. I'll also talk about events I plan to attend, and what I might wear to them: I am the type of person who will plan out what I'm wearing to an event up to a year in advance! This helps me space out the wearing of my garb; I don't like to wear the same thing to two events in a row. Hell, I don't like to wear the same thing within six months!

I don't often post in-progress pictures, because sometimes we have to abandon a project, or we lose interest and decide to put it away for a few months, or change our mind and don't finish it. I don't often completely give up on a project, but sometimes they get shelved for a while until an event to wear them to comes along. I also don't like seeing in-progress posts by bloggers, who then never finish that outfit, and so we never see the end result- I don't want to be a bad blogger!

January 14th is 12th Night in my SCA Kingdom, and I'll be heading over to Billings, MT, for their event. I'm going to wear my new pink silk satin 15th century gown, but instead of a hennin, I have a silk velvet open hood ordered from Lady Malina in Poland. Both of these hats would be acceptable to wear with this gown, but I decided on the open hood because I wore a hennin to my last event, and I just don't feel like wearing my big hennin for an entire day. Plus, new hats need to be worn! 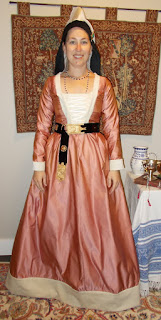 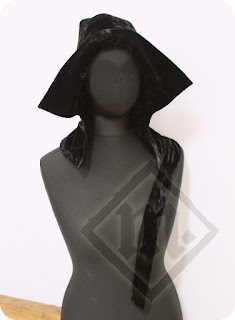 February 4 is the Regency Romance Ball in Salt Lake City. This event has been held on the same date as our local winter event, and it is again this year, but I wanted to try to get to the Regency Ball. I've been wanting more chances to sew costumes that are out of SCA time period (post 1600), and while I'm bummed to miss my local event, I want to do something new.

I've been working on Regency costumes for my husband and I since December. I've made him a waistcoat, shirt, and cravat, and purchased him breeches and a tailcoat. For myself, I've made a chemise and gown, and purchased a corset. Everything is finished except my gown. The gown is wearable, I'm just waiting on some trim to arrive for the hem and a belt. 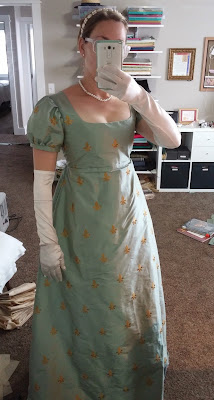 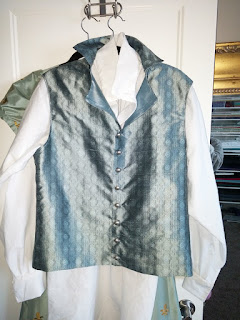 The first weekend in March, a friend is being elevated to the Order of the Master of Defense, and my friend Sarah and I have offered to make him a doublet and breeches for the ceremony. I will do the main construction, and Sarah will do the handwork. The breeches are nearly done, they're now with Sarah getting the handwork finished. Her handsewing is much smaller and tidier than mine, so it works well for us to share the work this way. I can handsew, but for a project that is a gift for a friend, it's best for us to use our strengths to make the best garment possible. The fabric is the same red silk brocade I used for my surcote with the floor-length sleeves, and it's fully lined in red silk. It will have lots of small gold buttons and black velvet trim. 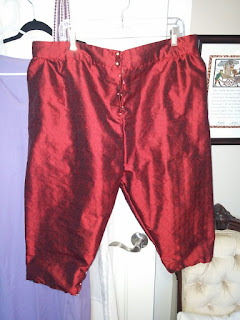 March also has us hopefully attending Coronation in Salt Lake City. Our current Artemisian King and Queen are doing a "Viking" reign (or maybe Rus?), and our Prince and Princess who will be stepping up at Coronation will likely also be doing something similar, Norse or Viking, so Coronation should be a very Viking affair. I'm currently well into a Norse project for myself, that includes several layers: linen underdress (serk), herringbone "wool" apron dress (actually a heavy cotton flannel that mimics wool), and a wool caftan/Birka coat. I've ordered new turtle brooches and made new bead swags to hang from them. Here's where I'm at today: 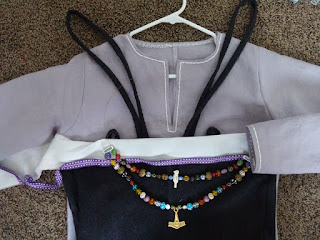 I started a pink wool flannel kirtle several months ago, perhaps even a year ago, back when I was still doing 16th century rather often. The bodice is an experiment in support: I've found that most of my 16th century bodices have too much compression on my chest, so I tried a new boning method for this bodice. When I finish the gown, I'll do a big post about how the support works and the boning pattern used. More gold silk trim needs to go on the sleeves and the hem of the skirt. It's all getting sewn on my hand, which has been good practice for making my handsewing even and less noticeable. 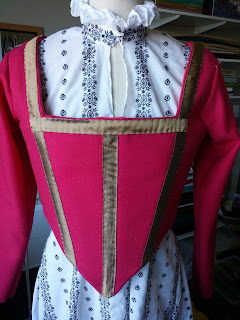 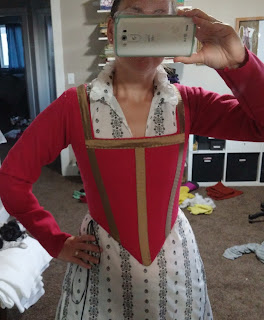 You can also see that I have a new smock with this kirtle. The fabric is an embroidered cotton I found in the LA Garment District last year. Of course linen would be the more historical choice for a 16th century smock, but I couldn't pass this fabric up, as it looks so much like blackwork, and it was $7 a yard!  The smock needs cuffs and the ruffles, and then it's done. I don't have a specific event to wear this outfit to, so it's not on my priority list for the next couple months.

April has Crown Tournament being held in Billings, so we'll definitely head over there for that event. I'll likely wear something fancy, as the event is being held indoors in a nice hall, likely with just the fighting outside. This calls for a nice dress but bring a coat along for standing outside to watch the Tourney. Perhaps the pink kirtle? I have a black, pink, and gold coat that I purchased from a friend which goes perfectly with this kirtle, so maybe I'll wear that. 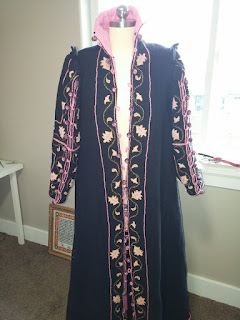 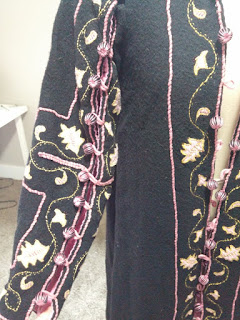 Speaking of this coat, it's another one of my projects for the first half of this year. The coat got washed after it was constructed and worn a few times outside, and the heavy wool fashion fabric shrunk, while the lining did not. This means that the bottom hem of the coat is uneven. I am going to try to stretch the wool back out, by getting the coat wet, putting it on my dress form, and tugging at the wool. If it doesn't stretch out, I will add a wide guard to the hem of the coat (likely some pink velvet I have), making it a bit longer. The coat fits great at the top, but because it shrunk lengthwise, and because my friend who made it is quite shorter than me, I could use a bit more length. This coat is absolutely incredible; the workmanship is exquisite and perfect, and I am so happy that my friend allowed me to purchase it from her.

I do want to make a white linen 14th century hood for summer, and embroider it with gold thread. I have found that a hood is great sun protection for the neck and chest, but my hoods are all wool, so I'm hoping to make a linen one that will work for sun coverage but not make me roast and sweat. Perhaps April or May will be the time to make that, before the summer events.

June might see me attending Uprising in Idaho, and I won't need anything new for it. I have so much camping garb now, because last year I went to Estrella War and SCA 50 Year, and made a ton of clothes for those events. Artemisia 20 Year is being held over the 4th of July weekend, and I also doubt I'll need new garb for that. Maybe another early period linen smock, but that's it. I've got a couple more events in Summer and Fall of 2017, but it's gotten to the point where I have so much garb, that I don't need anything new, unless a special event arises, or extreme weather.

I have a couple other projects on the "maybe" list, some of them finishing a project, some of them re-doing an old outfit. I started (and nearly finished) a late 15th century gown in silk brocade, but the collar ended up wrong, so I put it in the closet for when I feel like finishing it. My ice blue French gown from 2015 ended up a bit small in the bodice, so I want to re-do it, which means taking the entire thing apart. That is getting avoided until I want to wear the gown again for some special occasion. I wore the gown once in March 2015, and by the end of the day, I was actually suffering- it was too tight in the chest, shoulders, and armscye. That is what made me decide to work on my 16th century bodice pattern, which led to the pink kirtle experiment. Once the pink kirtle is done, I will decide if I like the new boning style, and then will apply my findings to fix the blue gown.
Posted by Jane at 10:28 AM