I have a really long write-up planned for my new Norse outfit, but seeing as the outfit is finished and I won't have time to do the big post for a couple weeks, I've decided to do a brief post with some simple pictures first. I plan to get in the outfit and style my hair and take some outdoor pictures, but I have been very busy in my modern life, and the weather here in MT has been so darn cold, that I haven't yet managed to get dressed up and take the pictures. But I will! This outfit demands some great pictures. At the very least, I'm wearing the outfit to Artemisia's March Coronation event in three weeks, so lots of pictures will happen then. 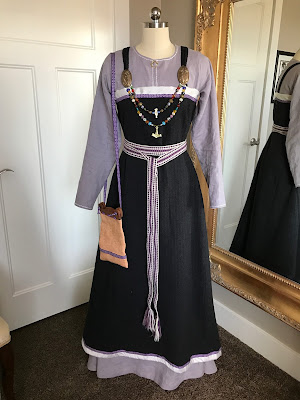 The layers consist of:
-a lavender linen underdress with white stem stitch embroidery at the cuffs and neckline
-a charcoal apron dress made from heavy cotton flannel with a herringbone pattern. This fabric mimis wool herringbone very closely. The dress is edged with white silk topped with linen tablet woven trim
-a wool herringbone caftan, edged with purple silk taffeta and topped with silk tablet woven trim, with a silver clasp at the natural waist to hold it shut
-a purse, sometimes called a Hedeby/Haithabu bag. The wood handles are from Etsy, and I used orange herringbone linen fabric, the leftovers of the dress trim, and some purple cotton thread to attach the pouch to the handles 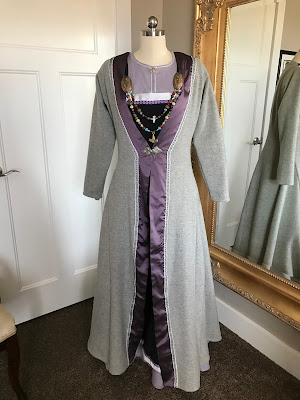 I really like all the layers of purple, the varying textures of the fabrics, and of course the accessories that bring it all together and make it a bit fancier. The brooches are from Raymond's Quiet Press- in hindsight, I wish I had bought a bigger size. These look good but I'm not a petite woman and I thought I wanted smaller brooches. Turns out I could easily carry a bigger brooch set on my wide shoulders! 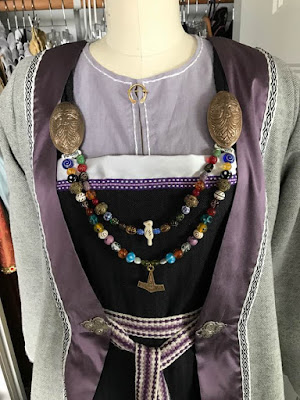 I made the swag necklace with beads from our local bead store. Some are semi-precious, some are glass, four are metal, and the white ones are bone, including the bird pendant and the spacers against the brooches. I added my Mjolnir (Thor's Hammer) pendant to the swag instead of wearing it as a separate necklace, and I definitely like it this way.

The belt is inkle woven, and I have read that inkle weaving as is typically done today only dates to the 19th century, not the 9th as I'm going for with this outfit. I've also heard that not using a loom to inkle is period, but I don't know anything (ANYTHING) about weaving. I bought this belt a couple years ago, and the colors happened to match perfectly, so for now I'm going to pair it with the outfit.

The clasp on the caftan was a gift from my mother last summer. She happened by a Mountain Man Rendezvous in Wyoming, and thought I would like it. I didn't know what I would ever use it for until the caftan was already complete, and the clasp works really well with the outfit. It has a three circle design with swirled inner circles, not unlike some designs I've seen on extant Norse jewelry. I'll find images of those for documentation on my later post.

The big post will be my documentation for the projects, how I went about researching the outfit, and why I decided to deviate from absolute historical accuracy. I'm excited to put my thoughts on wearing Norse in the SCA out in the blogosphere. The post will basically say: here is what we know they did in period, here is what I did, and here is why some of my stuff is plausibly period, and here is why some of my stuff is not quite right, and this is why I chose to do it this way. It's also about why I think we should be more flexible in the SCA regarding Norse clothing, which is something I never thought I would say. So keep an eye out for that post in a couple weeks!

Email ThisBlogThis!Share to TwitterShare to FacebookShare to Pinterest
Labels: Viking