Last weekend I went to Colonial Williamsburg (15 minutes from my house!) with my husband for a dinner and dancing night out. We went to the King's Arms Tavern, which was delicious and had musicians, and then popped by the Governor's Palace for an 18th century dancing demonstration, and we got to learn a few dances as well. 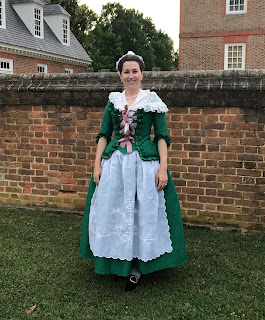 I am slowly easing my way into 18th century costuming, and decided to make another jacket with matching petticoat. This one is a bit fancier than the other set. The jacket is the JP Ryan pattern, and made into a "casaquin" style- I think! I'm not fantastic at the different names for the jackets, but I found some extant ones and based my jacket off of them. I wanted something with self-fabric trim and ribbons. Casaquin jackets are likely hip length, with flared panels, and show up around the middle of the 18th century. Earlier jackets tend to have wide flared cuffs, and later jackets often have self-fabric ruffles at the elbows, so I chose that style. 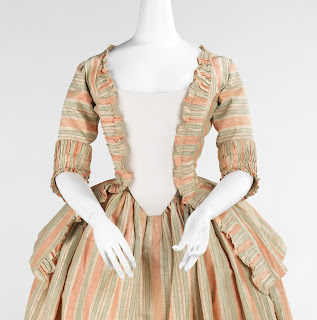 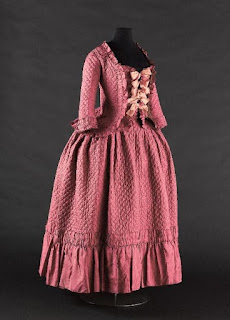 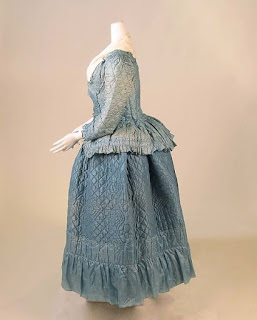 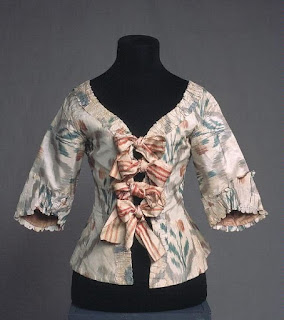 My jacket and petticoat are made from an emerald-hunter green silk/linen blend. My gold 1770s petticoat is also silk/linen, but that mix has more silk, and the green is more linen. It does still have a light sheen to it though. The rose pink ribbons are silk. I chose pink because I loved the combo with green, but I also have some rose silk satin that will become another petticoat and could get worn with this jacket, and then they'll match. The trim is box-pleated self-fabric, which I did on the machine as I went along, as I can pleat evenly without pinning. This is certainly not an historically-accurate method, but it went together quickly and easily, and the machine stitches are barely visible. 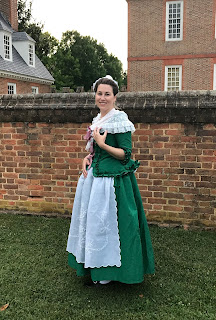 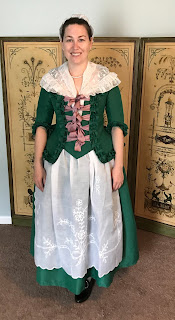 The jacket bodice is lined in white linen. Normally I like to line my outfits in nearly-identically colored fabric so you don't notice the inside edges, but you nearly never see that historically, so I went with the white linen. I don't love how it shows at the bottom skirt edge, but hey, it's correct. 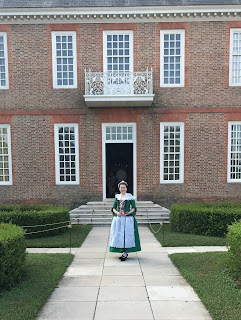 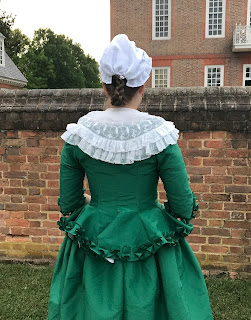 Here's how it looks without the neckerchief and apron. It could be worn this way for evening with fancier jewelry and hair, but I like how the white accessories make the fabric pop. 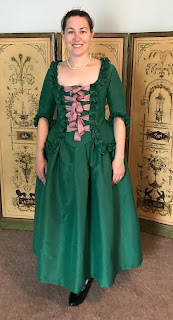 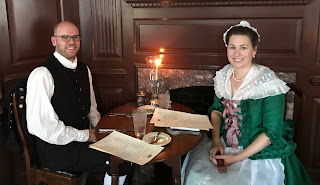 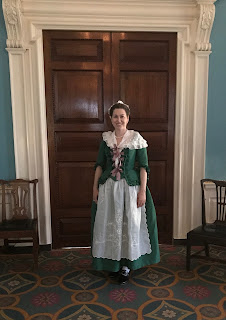 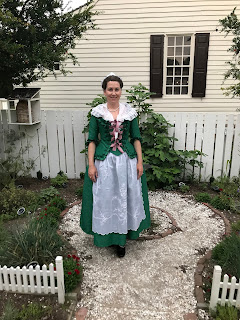 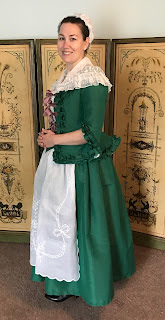 I purchased a suit of linen clothes for my husband from Jas. Townsend. It consists of a coat, waistcoat, breeches, and hat. They are very well made but all a bit big for him, so I will be taking them in soon. I made his shirt and neck-cloth for the Regency ball a few months ago, but they work for 18th century, too. His shoes are from Fugawee and the buckles are the "James" from K. Walters at the Sign of the Gray Horse. 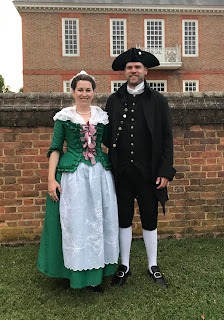