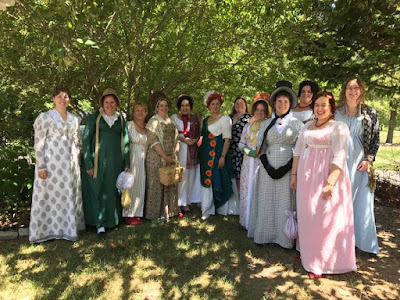 In July and August I put this Regency-era dress together, knowing there would be more Regency-themed events coming up this year for me to attend. The first one was the annual Regency Tea put on by the Regency Society of Virginia. It's held at this sweet little house in Amelia, VA, where they have a tea room set up downstairs. It was a great event, well attended, and everyone's costumes were top-notch. I have rarely seen such great quality costuming by every single person attending, ever. 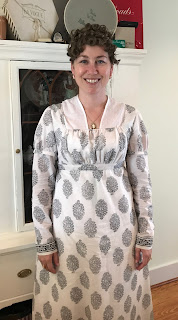 I hunted around for some fabric in early July, settling on a white cotton muslin with a hand-done Indian block print in black. I wanted to avoid a mostly-white dress, as they seem so common in the reenactor community (probably because they were extremely popular historically), but I came across this black and white print on Etsy and decided to go with it.

My main dress inspiration was this extant dress, along with the pattern to another extant dress held in the Genesee Country Museum. Both date to around 1810-1815. They both have a drawstring front bodice placket, which I wanted to try instead of the simpler drawstring bodice we see pretty often. The pattern for the extant dress was way too small for me, so I used most of my Regency bodice pattern as a base, and then made the front rectangular panel. The panel has the lower gathers stitched to a waistband, while the upper gathers are on a drawstring. My dress buttons up the back instead of on a drawstring. 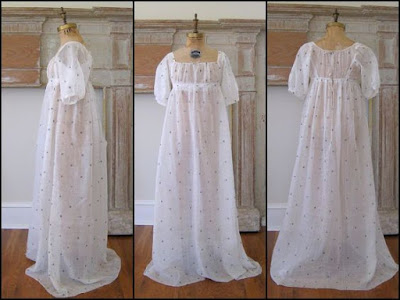 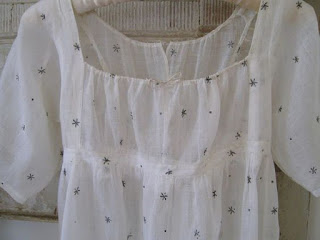 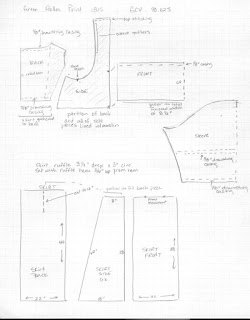 Block printed cotton fabrics were very popular during the Regency era. Here is an image of a sample of print patterns, and other dresses that I used for fabric inspiration. Notice the border on the hems. I had to cut off the border of my fabric and re-sew it onto the hem and sleeve cuffs, as the pattern for the fabric ran vertically while the border was only on one side. I have a black silk spencer in the works as well; I didn't make it for the tea as I knew it would be very warm at the event. 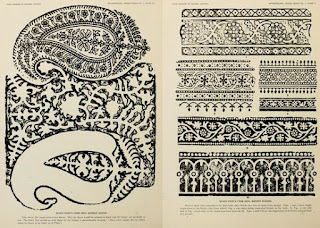 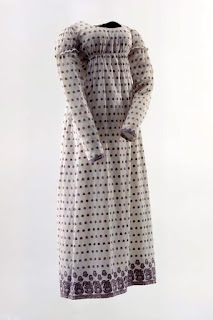 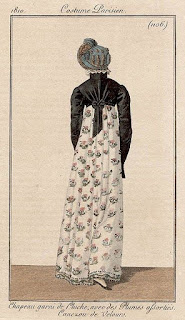 And now for some pictures from the tea! I made a simple swiss dot chemisette, but I need to add a ruffle onto the edge. I may re-do it entirely and make it a high collar instead of a v-neck. Mostly I needed something quick because my corset is purple and the dress is unlined and I didn't want the corset showing! I do have on a white cotton tucked petticoat, and with the chemisette, the outfit is not see through, except the sleeves. 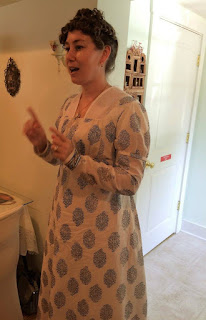 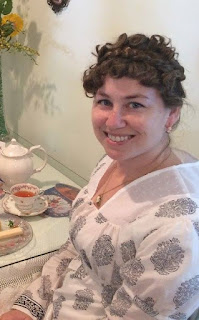 My hairstyle was pretty easy to do, now that I have some hair pieces. I have the curled bangs I made for the Regency ball earlier this year, and added my braided headband. All of my own hair is just in a simple bun. I decided not to buy or make a bonnet/hat for this event as it was all indoors. I definitely want to get a black hat or bonnet soon. 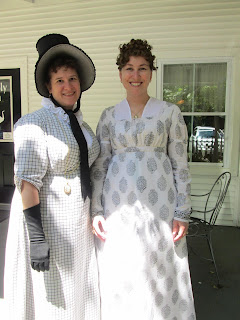 Stacy from the Regency Society was also wearing black and white, and looked fabulous! My SCA friend Pamela came to the event with me, and I helped her put together a blue wool drawstring dress a few weeks before. She paired it with a gorgeous neckerchief and shawl. We had our own little table at the tea and got two of each savory treat. 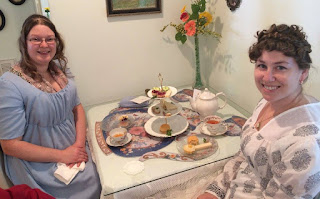 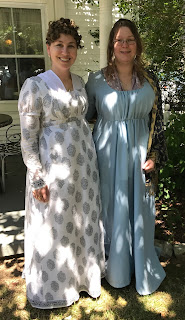 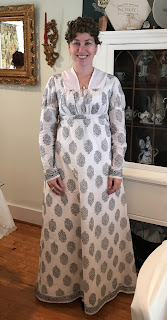 I'm quite pleased with how this dress turned out. It was just the right weight for the temperature of the day, so I think it'll get a fair bit of use at warm events. Maybe if I can attend the Jane Austen Festival in the future (Kentucky in July!), I can wear it there.

I have two more Regency/Jane Austen themed events coming up in September and November, but I think I will be wearing fancier dresses to those. The dress for the September event (the Jane Austen Ball at Gadsby's Tavern in Alexandria, VA) is pretty much done, and it's a 1790s blue silk drawstring gown. November is a Regency Murder Mystery party put on by the Regency Society, and I won't know what I'm wearing until I'm assigned a character. I wouldn't be surprised if I made something new for that as well!

Email ThisBlogThis!Share to TwitterShare to FacebookShare to Pinterest
Labels: Regency