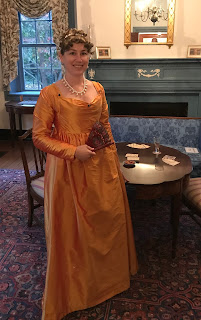 This past weekend I attended a themed murder mystery party hosted by the Regency Society of Virginia. The event was held at the historic Francis Land House, built 1805-1810, and is now a museum in Virginia Beach. It was a really neat event that was quite well organized by the Society, and I absolutely plan to attend again in the future. Being able to have the party inside a historic house helps with the setting- much better than a community center! I dragged my husband along as well. This is three Regency-themed events for him in one year, so I guess I had better make him some more clothing! 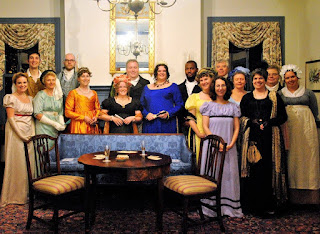 The assembled guests in all their finery


The event was to be held on Saturday evening, and I originally planned to wear my blue silk 1790s gown with black accessories, but having forgotten to take the gown to the dry cleaners after the last wearing (it got some food spilled onto the skirt), I wasn't feeling particularly excited to wear it. On Thursday afternoon, only two days before the event, I decided I wanted to make something new, because I am a Crazy Costume Person. Everything for the gown was already in my stash. Here is the result! 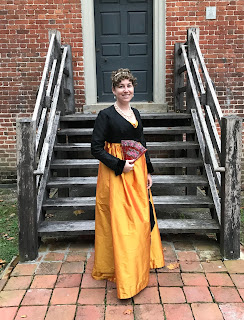 I had purchased this pretty orange silk about 2 years ago, with plans to use it as a lining for a different gown. When I purchased it on Ebay, the listing photos made it look like a bright gold. However, it is quite orange, created by the red and gold crossed threads. It might have been the influence of the autumn leaves here in VA that made me decide to use this silk! It also really popped with the black accessories I had recently finished- perhaps I was still in Halloween mode when I started the dress on November 2nd. 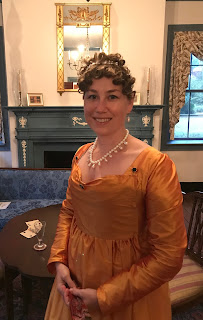 I used the Laughing Moon fall-front gown pattern for this, and their pattern is a pretty close fit for me. I only altered the size of the bib and the sleeve length, and looking back, I wish I had made the bib bigger and did some gathering for a more "ruched" effect. But it ended up quite close to what I envisioned.  Per usual, I made my own skirt pattern, which was just two fabric widths with slight trapezoidal shaping at the top, to make the hem kick out a bit. I made the skirt extra long so I could add some tucks at the hem. 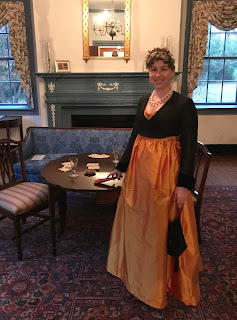 I had started the spencer a few weeks back, expecting to wear it with my blue 1790s gown. It's silk brocade with a paisley pattern, with silk velvet cuffs. It's also from a Laughing Moon pattern, which again, fit pretty well out of the package. 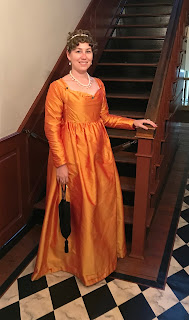 The reticule is made from leftover pieces of the spencer fabric, with a turks-head tassel for interest. 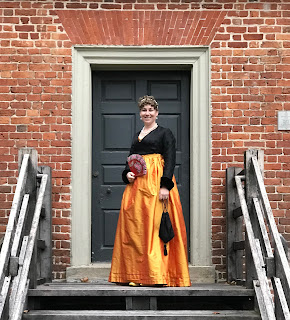 The shoes were surprisingly not planned for this gown, but they matched almost perfectly! The shoes were first worn with my blue 1790s gown at the Gadsby's Tavern Ball in September, but I failed to get a decent photo of them at that time, so you're seeing them now. I purchased inexpensive, bright yellow velvet d'Orsay flats and sewed lacing rings onto the sides and top of the heel, and laced some silk ribbon through. They're supposed to look like these amazing slippers painted by Vigee-LeBrun around 1800. 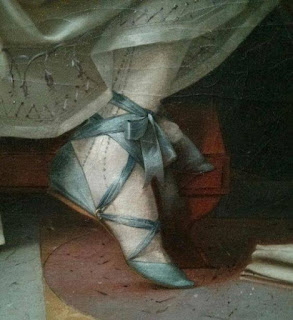 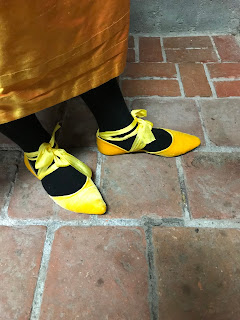 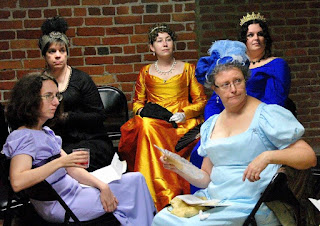 My hairstyle is quite similar to the one I wore to the Regency Ball last February. I put my real hair in a bun, then added the fake bangs and the pearl headband. This time I also added an awesome black netted bun cover, which was super necessary because I have cut off half my hair and the ends are rather choppy and layered, so the bun would just not stay tidy without the cover reigning in the ends of my hair. But it ended up looking really great and I didn't have to touch it all evening. 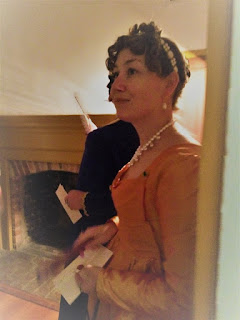 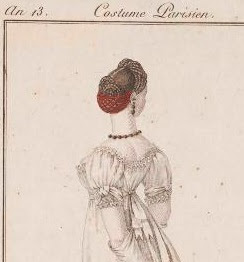 A hair net being used in the Regency period. 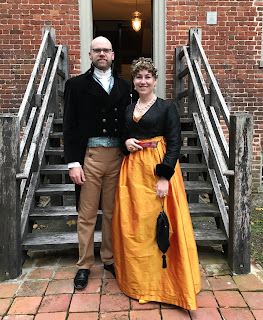 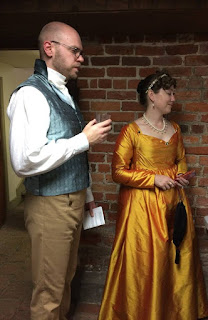 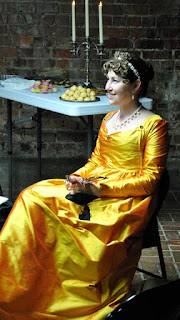 Email ThisBlogThis!Share to TwitterShare to FacebookShare to Pinterest
Labels: Regency