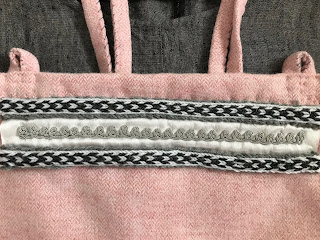 Back in October/November, I started planning my third Norse apron dress. You've seen the first one on this blog earlier in 2017 (the gray and purple), but I don't have any good pictures of my second version, a purple open front apron dress. I've worn the purple one to an event, Atlantia University back in September, but didn't have a chance for any pictures to be taken of me wearing the dress. So you're seeing my third apron dress now, because I wore it to Holiday Faire in mid-November and manged to take a lot of pictures. 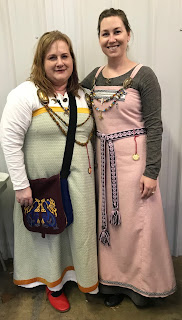 I purchased 1.75 yards of pink and white herringbone wool last year, expecting to make a hood out of it, but I thought it would make a fun Norse apron dress. I barely got the dress from this yardage because I had to pay attention to the direction of the herringbone weave and have it all go the same way.

Very basic construction, just like my gray and purple one. Three body panels: one in front, two in back by cutting the one back piece in half and inserting a gore in the center back. One gore on either side as well. By having a center back seam, I can make this a little more fitted.

The really special thing about this apron dress is the detail work. All of the hand sewing was done with gray silk thread to make it stand out from the pink. I purchased some hand made tablet woven wool trim in a charcoal, light gray, and white chevron pattern, which was applied to the entire hem and the short strips across the center front. I also purchased some hand made posament trim (silver wire) and sewed it onto a strip of white silk to lay between the tablet trim. I've also been hand stitching the seams down on the inside with a whip stitch that shows thru to the outside for a little something extra. 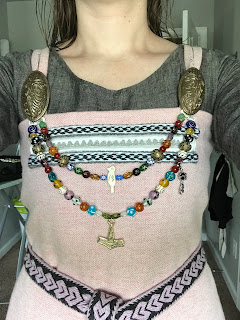 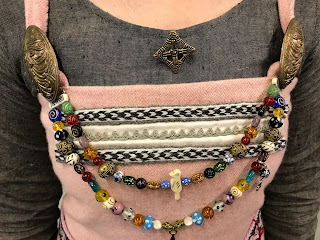 The belt was purchased from the same Norwegian seller as the trim. It has a subtle heart pattern in gray and pink wool, and is very well made. Super cute! 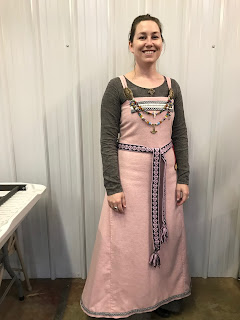 My underdress is a linen from Joann's, in a black and beige weave that is dark gray in person. I made this underdress as a simple "cote" about 2 years ago, for SCA 50 Year, and I have worn it at camping events because it just pops on over the head and is very comfortable and machine washable. It just barely pulls over my shoulders and chest, so it's quite fitted, which I prefer for underdresses. I have now been using it for Norse and I think it's found a true purpose. 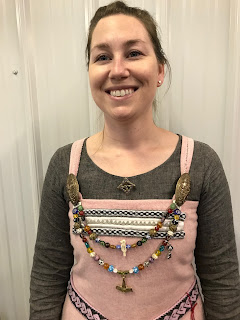 My dear friend Mistress Katya visited me in Virginia and came to the event. She flew in a couple days beforehand, and we whipped up the green apron dress you see her wearing in only 3 evenings of work. Hers is a fabulous green and white linen herringbone fabric I purchased from a Lithuanian Etsy seller, and the trim is the same silk as my last orange Regency gown! We hand sewed it all on, sitting on the floor with each of us on a section at a time. Teamwork! 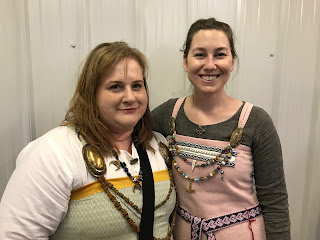 Here is our group of Norsewomen all together and looking fantastic. HE Mistress Katya of Artemisia, myself, my new friend Jane (her real name, my SCA name!) at her first SCA event in an outfit I helped her put together in the months leading up, her best friend Grete who borrowed a Norse outfit from me for what was also her first event, and my new friend Lady Serafina, newly moved to Atlantia from Northshield. It was a great day of shopping and girl time, with so much knowledge being passed around, and lots of plans made. 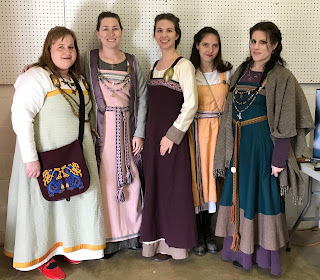 And just for fun, here's a quick snap of my purple aprond dress completed in September. It's a very unusual one, with an open front and a pleated-to-hell back. 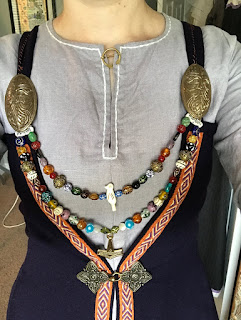 Because I'm a sucker for Norse now, apparently, I have another outfit being planned right now. Fabrics are purchased and on the way. It's gonna be a LOT of blue! I also have ordered epic new brooches in gold-plated bronze, plus new jewelry. What happened to me hating on Norse even a year ago?! I was warned that once you go Norse, you never go back... and I'm worried that they're right!
Posted by Jane at 9:22 AM

Email ThisBlogThis!Share to TwitterShare to FacebookShare to Pinterest
Labels: Viking