Costumes Made and Worn in the Last Few Months

I have been attending events and sewing in the last few months, but haven't gotten around to writing lengthy blog posts about my outfits. So I'm going to post some pictures and descriptions of what I've been up to lately! 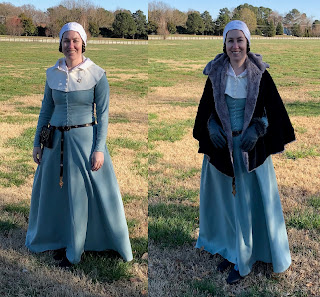 A friend of mine invited me to his LARP coronation, and I fixed up this wool kirtle from a couple years ago that only got worn once because the fit wasn't my favorite. I removed the entire cotton lining and then hand stitched all the new raw edges. It fits and wears much better than before and I hope to wear it more often, but it's rarely cold enough at events to wear wool! Also got to wear my wool and faux fur short cloak, which was quite effective and will get worn again at Pennsic this year. 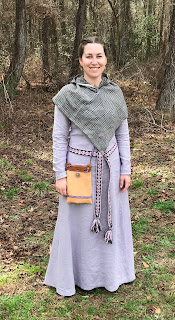 I attended an SCA event in late February in North Carolina that was Viking-themed, so my husband and I wore all Viking that weekend. For me that was three entire outfits, for him about two full outfits. During the day I wore my lavender linen underdress and a new linen Skjoldehamn hood. It worked well for the 80 degree heat that day. That evening I wore my purple wool open-front apron dress with a new off-white linen underdress. There's a lot of debate about if open-front apron dresses were a thing (and most current scholars don't think they were), but some past scholars thought it was a possibility, and that's good enough for me. Plus, it was an experiment in patterning and construction for Norse clothing. It has pleats in the back, as we know there were pleated garments in the Viking Age. The fit is very complimentary and I get a lot of interested comments when I wear it. 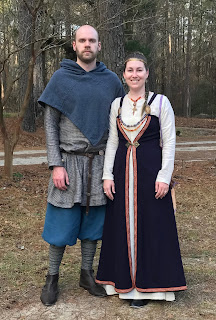 The husband got a whole new Viking outfit. Linen diamond twill tunic, linen pants, herringbone flannel hood, belt, pouch, and shoes. I think it's a great look for him and will be making him more. 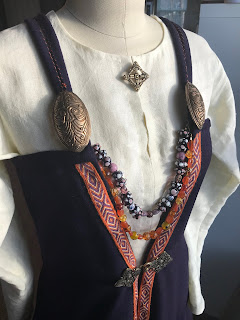 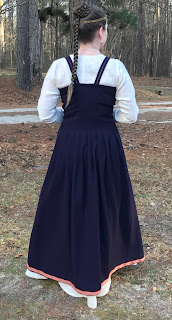 Early April was an SCA event in my local barony, and it was about 85 that day, so I wore all linen: my black linen kirtle with my white linen hood and St. Birgitta's Cap. I'm now no longer wearing an additional underdress with my linen kirtles (they lace completely shut so nothing shows) and it is really helping my heat issues. 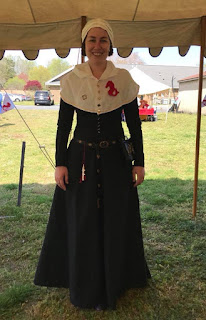 Next was a Regency picnic at Bacon's Castle. I wore my only Regency day dress, but I purchased a chemisette from another costumer a few months back, plus bought a straw top hat and trimmed it with silk ribbon (it has since been improved by Rebecca from Shocking Bad Hats and you'll see it again). This was an absolutely lovely outing. I have several more Regency day dresses in the works because I'm going to Jane Austen Festival in July and I need more! 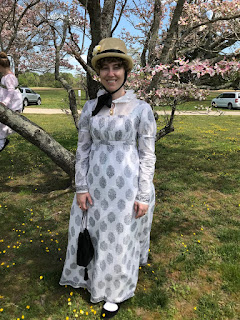 The first weekend in May was the Garden Party at Colonial Williamsburg. I wore a francaise gown I purchased from Lindsey of the Whip Stitchery, made from silk brocade and trimmed in gold lace. The event was rather short for how expensive it was (2 hours and $100!), but I got to meet some costumers I've followed for a long time so that made it worth it. 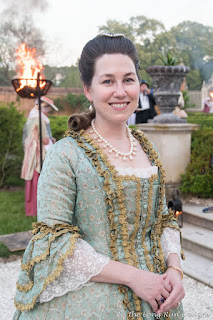 These two photos courtesy of In the Long Run Designs 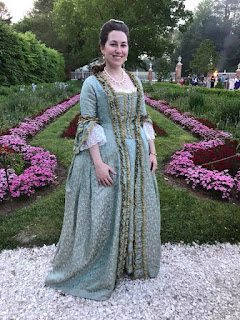 I also trimmed and altered a francaise that I had made last year in sapphire blue silk taffeta that had sat in my stash for 9 (9!!) years. I trimmed the petticoat, robings, and remade and trimmed the stomacher and sleeve ruffles. I made the trim using scalloped pinking shears and then hand gathering it, then hand sewing it all on. It took a while and caused a lot of wrist pain but I'm glad it's all done. My mom wore the gown to the Garden Party and looked marvelous. 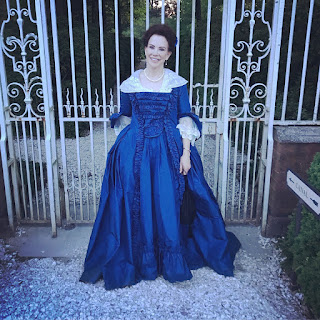 I have a ton of events coming up in the next few months, so expect photos as those happen. I also now have an Instagram, my handle is @janefoxcostumes, and I've been posting a lot more often there, so follow me!
Posted by Jane at 7:25 PM