Coronation Clothes for His Majesty Ibrahim of the Kingdom of Artemisia 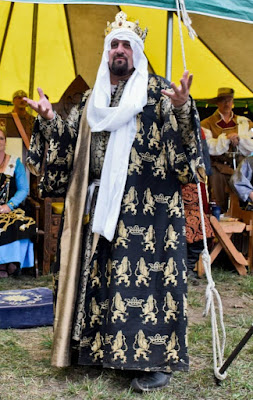 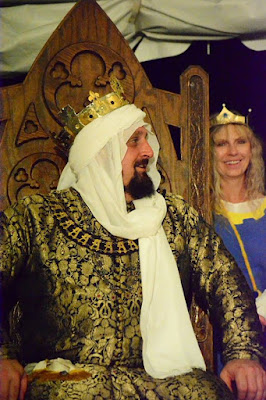 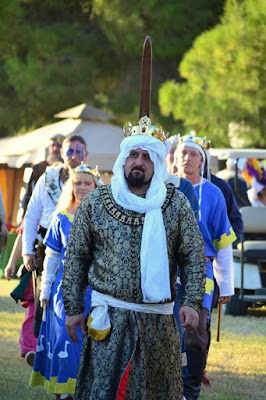 His Majesty has 4 layers of clothes, Her Majesty has 5. We decided he didn't need a fitted underlayer like Esther's hirka. He has a gomlek, entari, ceremonial caftan, and pants. His gomlek is nearly identical to Esther's except he has two gold buttons on the keyhole neck. 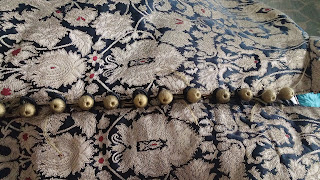 The entari is a black and gold silk brocade from India. It is fully lined in white cotton, and faced in red silk. The buttons were made by Lady Michelle of Harris upon York, and are thread wrapped wooden beads. I dyed them a darker antique gold, which went much better than I expected. Michelle made them exactly as I asked, but it was my fault for telling her bright gold- I didn't realize the brocade was so dark! 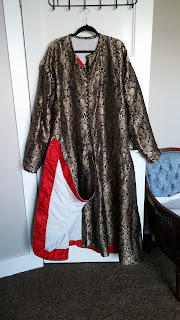 There are 20 buttons and loops, and the buttons, collar, and facing are all done by hand. 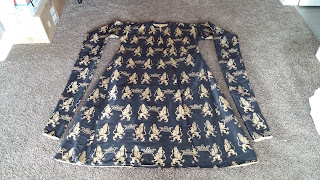 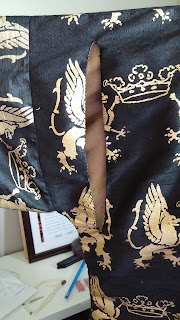 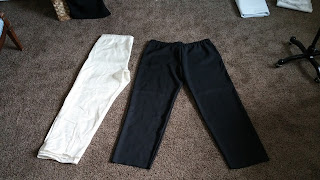 The ceremonial caftan is very similar to Esther's. It also has integrated gores, expect I opted to make both the front gores start at the neck, instead of one starting at the waist. I thought it would make the caftan hang better when worn open. It is fully lined in gold silk. Again, the block printing was done by Viscountess Morrigan of Avacal.


One unique feature of many ceremonial caftans from the Ottoman Empire are the sleeves. Many of them have enormous hanging sleeves that sweep the floor, and there are slits in the front body pieces where you put your arms through. The sleeves are just decorative and show off your expensive fabric, and when you put your long entari sleeves through the slits, you show off even more fabric.

His slits were done very carefully with a rotary cutter. I made up the whole garment and saved the slits for last. I laid the caftan out, pinned into the carpet so it wouldn't move, laid the cutting board between the front and back pieces, and slowly cut the front pieces a few inches away from the sleeve head. Then I whip stitched them shut.


Here are His Majesty's pants. The white ones were the first pair I made, he wore them to Coronation. Just yesterday I made him a black silk pair as well. They are copied from his favorite pants, per his request- I just laid his original pants onto the new fabric and cut out the pattern.
Posted by Jane at 2:34 PM