Coronation Clothes for Her Majesty Esther of the Kingdom of Artemisia 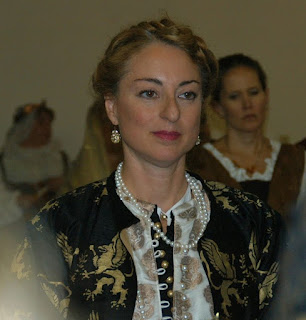 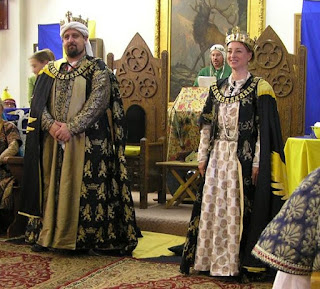 Now that Their Majesties of the Kingdom of Artemisia, Ibrahim & Esther, have been crowned, I can post about their Coronation clothes. This post is about the planning, construction, and layers of Her Majesty's outfit. I couldn't post anything while the clothes were being made because Her Majesty wanted all of it to be a surprise! Pictures of them wearing the outfits will be a later post, because not many have surfaced yet.

Her Majesty and I planned her outfit in April, after they won Crown Tournament. They decided on an Ottoman Turkish theme. We knew that Kingdom colors (black and gold) would be best, and those colors are traditionally used for Coronation garb for many Kingdoms. Her Majesty is petite and light haired, while His Majesty is tall and dark haired. We wanted to play up the physical differences, and keep her light and airy, and him dark and strong.


For research, I used several books provided to me by Her Majesty Esther on the topic of 15th-16th century Ottoman Empire/Turkey. There are dozens of surviving garments from that period that can be studied. Research and documentation was not difficult to find. As for patterns, Her Majesty had some from previous garments she has made, so we modified them to suit these new layers. Some patterns were drafted by me as well, from fittings with Esther.

Here's the quick info for documentation: silk, cotton, and linen were all used extensively in the Ottoman Empire for royal clothing. Most garments were lined in white cotton or linen. Metal and pearl buttons were used, though most are thread-wrapped. Most button loops appear to be handmade cord- I used machine made cord for time saving. Side gores could be normal triangles or be rounded at the top- I did both. The front gores (usually one starting at the neck and one starting at the waist) could be cut on their own and sewn to the body pieces, or cut integrated to the body pieces- I did both. 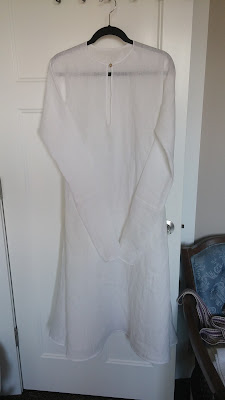 The first layer is a gomlek, which is the undergarment. It is a medium weight white linen, cut very full with extra long sleeves and a tight wrist, so the sleeves wrinkle at the lower arm. It has a keyhole neckline with a gold button, side gores, and is cut without shoulder seams. The Ottomans frequently used full loom widths on their garments, which is what this gomlek has- notice the seams around the lower sleeve, and how full the hem is. 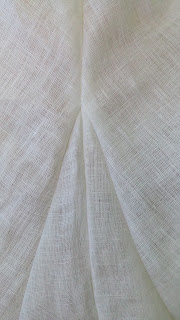 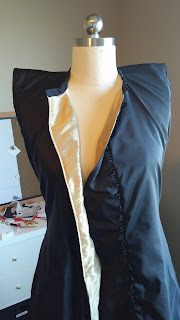 The next layer is a hirka, which is usually shorter and worn right after the gomlek- you can wear it over an entari (next layer), but it seems less common in historical sources. Hirkas in period could be sleeveless or have elbow length sleeves, and the hem could be anywhere from the top of the thigh to below the knee.

This hirka is cut very fitted, with curved side seams and a back seam. Her Majesty is a Laurel for Middle Eastern dance, and we wanted her to be able to wear this hirka for dancing, which is why it's so fitted- that enables the dance movements to be seen more easily.

This hirka is black silk taffeta, lined in white linen, and faced on the front and hem with gold silk. The shoulder seams are straight and I can't pull it down enough on my dress form to get them flat, which is why they stand up so high in the pictures. They're level on Her Majesty. 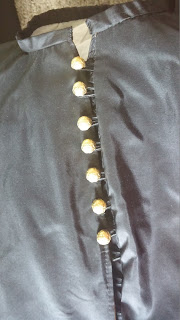 The collar and closures. Loops are done on the machine, the collar and buttons are attached by hand. It closes with 18 gold buttons and black cotton cord loops. 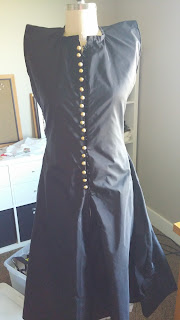 The hirka has curved-top side gores which are hard to see in the photos. 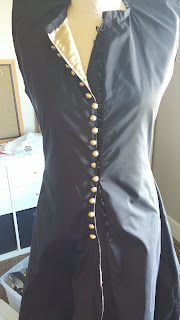 When the hirka isn't closed all the way, you can show off your facing. The facing is attached on the outside edge by machine, and inside by hand. 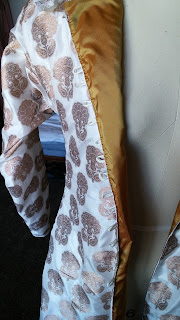 Next up is the entari. This was usually worn over the hirka, and could have elbow length or wrist length sleeves. It was often knee-length or longer. This one reaches the ankles because it is a formal style. It is slightly bigger than the hirka, with curved side seams but no back seam.

The fabric is a white and copper-gold silk brocade from India, fully lined in white cotton, and faced in a sunset-gold silk. Buttons are pearls and loops are cotton cord. 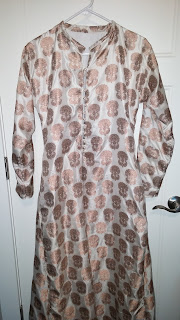 All closed up. The collar and facing are sewn on by hand. 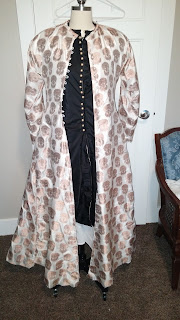 The entari over the hirka. You can probably just make out that the entari has integrated front gores, so the pattern isn't interrupted. 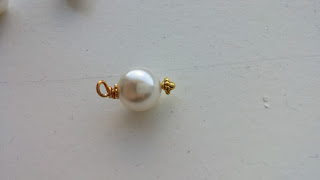 When it came time to do the buttons, I couldn't find any metal that matched the copper-to-brownish gold in the silk brocade, so I made some! They are 10mm pearls on a gold headpin, wrapped into a loop at the base. I did find 16th century documentation for pearl buttons on the garments of the elite in the Ottoman Empire. 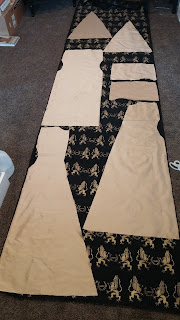 Next up, the ceremonial caftan. There are countless sources of documentation for these garments. Her Majesty has a friend in the Kingdom of Avacal, Viscountess Morrigan, (link to her block printing FB page), who makes block printed fabric. She made the blocks, purchased black silk, and used gold paint to stamp the silk. Her Majesty's fabric is the Artemisian Gryphon with a crown and a laurel wreath, His Majesty's is the Gryphon with a larger crown.

This picture shows the gold silk lining I cut out first, then laid on the fabric so I could pattern match. 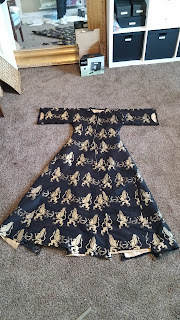 The caftan reaches the floor and has elbow length sleeves with curved edges. The short sleeves over the long entari sleeves show off the silk brocade. It has no closures so it can be worn open to show the layers underneath. Many ceremonial caftans in period had no closures, and most extant ones had the front gores cut integrated to the body pieces, like I chose to do. 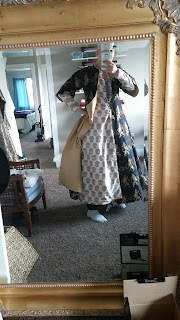 Here I am in the hirka and entari, to send a picture to Her Majesty of how it all looked on a person.


The only layer I don't have a picture of is the pants. They are Ottoman salwar out of some white and gold fabric Her Majesty gave me. They went together fast, and Esther came over to work on them with me, and to make sure they were comfortable. You only see a couple inches of their hems when they're worn. The following post shows His Majesty's pants and they are nearly identical to Esther's.
Posted by Jane at 1:54 PM