Here's a lengthy post full of pictures of my new blue silk cotehardie worn over a gold silk kirtle. I started working on it about ten days ago, and about half of the days were spent letting the hems hang- the whole outfit took only a few days.

First up is the gold kirtle. It's made from a buttery, smooth dupioni silk, fully lined in white cotton. The pattern is my body block, with two rectangles in front and two in back, with four gores- one on each side, one front, one back. This makes for a decently full hem.  The sleeves have five small gold metal buttons at the cuff, and like they did occasionally back then, they must be buttoned to fit. The kirtle laces at the right side with ten eyelets, ladder laced.

The kirtle was made to be worn primarily under a "gown" layer- a surcote, cotehardie, or sideless surcote. I have a few over layers in the planning stage for SCA 50 Year and other events, so I got to work to get this one done so I can make the stuff to go over it.

This kirtle can be worn on its own, however, with some accessories, if it's hot out but you still want to look dressed-up. If I wear it alone, I can put on my black leather belt (with gold mounts, strap end, and buckle), black and gold pouch, and my black velvet fillet. A veil would be appropriate as well. The belt was assembled by me with some assistance from my friend Paul (great way to introduce a person to the SCA- hand them some pliers!): we put the buckle, strap end, and 14 mounts on the leather, which I thought I would always be too lazy to do and just buy a pre-made belt. I would make more in a heartbeat! It wasn't difficult at all.

And now for the cotehardie. This one is made of a rather stiff, dark slate blue silk dupioni. It is unlined because I wanted to be able to wear it on hot days over the kirtle and not be too warm, and the silk is a bit more thick than I have often found- it holds its shape very well. The pattern is identical to the gold kirtle, but opens in the front and has short sleeves using the same pattern as my long sleeves. The buttons are gold metal to match the kirtle buttons. 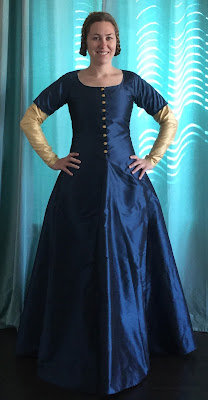 The cotehardie can be worn "dressed down", as shown here with the black leather belt, fillet, and a fine linen D-shaped veil. It's still quite fancy, and I rather love the black accents with the blue, likely due to the fact that the blue silk is slate blue shot with black. 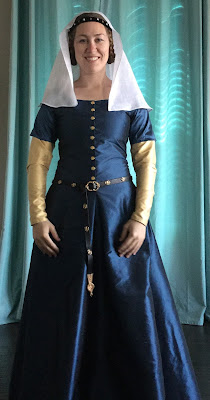 Gotta do the effigy pose to best show off your sleeve buttons! 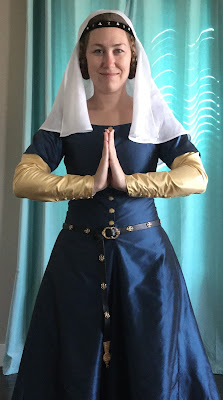 I look a smidge smug here which I why I have to force myself to show teeth when I smile! It's a good view of the fit. 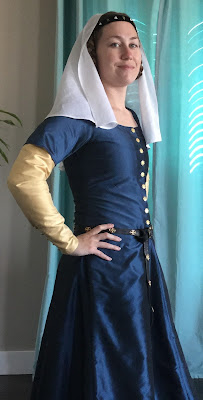 Now if I want to dress it up and make it as fancy as I can, I wear my gold plaque belt, add a gold and enamel pin (both from Raymond's Quiet Press), and a coronet over a silk veil. The coronet I'm wearing here has been graciously loaned to me by Her Excellency Katya until I have a custom one made. 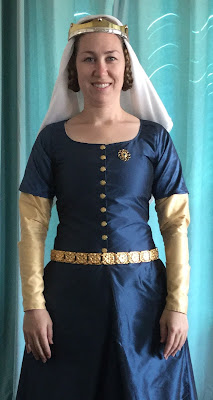 Back view- the back gores on the cotehardie and the kirtle are pieced down the center, a very historical choice. It takes an extra minute to line up the extra seam but it's worth it! Also, I'm happy to see the short sleeve back seam line up exactly with the long sleeve seam. 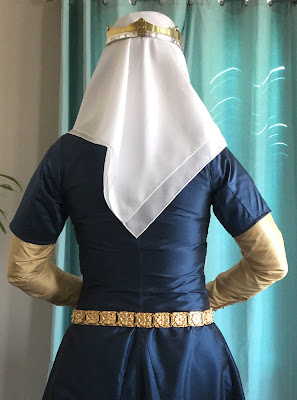 Some "historical-fies", as I call them! 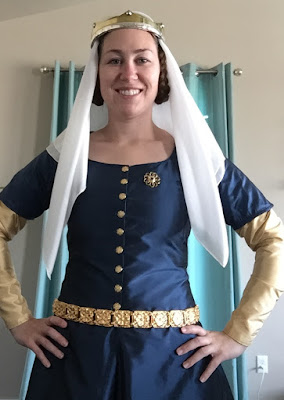 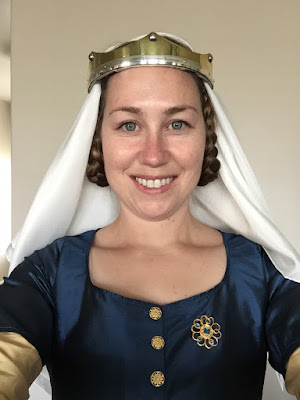 Here is a closer view of my hairstyle. I start with two pigtail braids behind the ears, loop them in front of the ears over the temples, and pin them at the crown, where they overlap a bit, and I tuck the tails under the opposite braid. I'm still working on improving my hairstyles, and this one can be done quickly. It is a style often seen in period paintings. 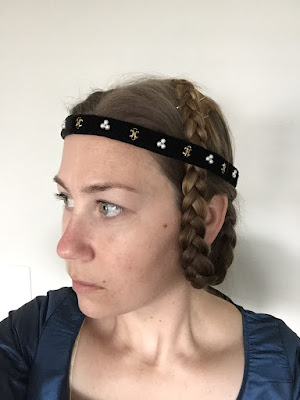 Here's a detail shot while the outfit was in progress. 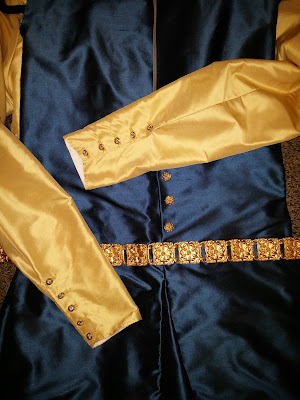