This was a fun project! I wanted some more layers for my new 14th century persona, and of course that had to include the ubiquitous cotehardie. Before I delve into the details of the layers in the pictures below, let me talk about what each of them are called, and how I personally define them. 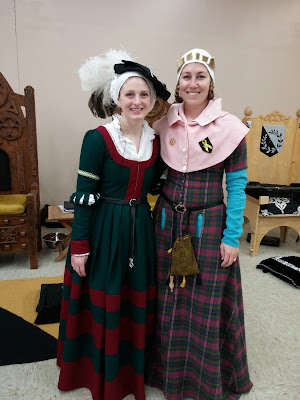 Cotehardie: to me, this is one particular kind of overdress seen in the 14th and early 15th centuries. It has short sleeves and buttons to close the front opening (buttons can go to the waist or the floor). It is always worn over another layer, namely the kirtle. A cotehardie is not a kirtle or a surcote. A kirtle is the layer over the underwear, and a surcote rarely has bicep-length sleeves (usually the sleeves are wrist length, fore-arm length, elbow length with integrated tippets, or sleeveless). The term "cotehardie" does not cover all dresses of the 14th century. See La Cotte Simple and her incredible research for more information.

Daughter of Elizabeth Montacute, 1354, wears a blue cotehardie over a green or mustard kirtle, with gold buttons and white fitchets (pocket slits).

A very fancy cotehardie painted by Jourdain de Blaye, shown over a white kirtle, and she's wearing a hood with the collar turned down.

Kirtle: typically bust supportive, can lace up in the front (most common), sides, or perhaps the back, with hand-done eyelets. No grommets, my friends! No pictures because simple kirtles are everywhere. See past posts of mine for more info about kirtles.

Hood: these can be as short as your shoulders or as long as your waist. The most common style for women is worn open but I use hoods for warmth, so I prefer the styles with buttons to close them. Ladies hoods could have a pointed top (like I chose this time), or a liripipe (shown below). 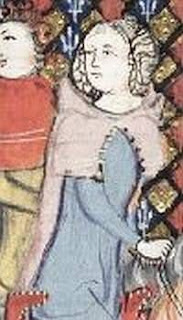 Frauengugel, 1340s. Pink hood with buttons over a blue kirtle or surcote.

Now onto what I made. The kirtle is a turquoise linen, unlined, so it can be worn on the hottest of days. It has 26 spiral-laced eyelets up the front. The pattern consists of two rectangles in back and in front, with four gores (front, back, sides), and is based off my body block. The shaping is done on the sides and back, as I like to leave the front edges on the straight. The front edges with the eyelets have a strip of matching linen inside to reinforce the eyelets. 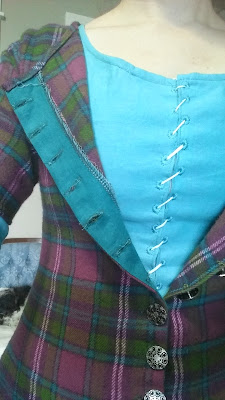 The cotehardie is made from a plaid cotton flannel that looks rather wooly, even up close. This fabric is much heavier than typical cotton flannel that you see used to make pajamas and shirts. The cotton is very warm and surprisingly, water beads right off when you spill on it. I now have this fabric in 4 colors because I love it so much, and it's great for a breathable but warm layer. An excellent, inexpensive substitute for wool. The front edges have teal linen strips on the inside to make the buttonholes stronger. The buttons are metal, from Etsy. The pattern is my body block with integrated side gores and one back gore. I cut slits at the front hips and hand-sewed them open to make fitchets. It's fun to put your hands in and keep them warm!

The hood is pink wool lined in pink linen. It is obviously based on the above painting. It has six buttons made of faux mother-of-pearl I had in my stash. I chose the white buttons so that I can wear the hood with garments that have silver or gold buttons. I admit to having issues with this hood, and it was my first. Turns out my shoulders are too wide for the pattern in The Medieval Tailor's Assistant, so I had to make wider godets. It's also big in the neck, so I have plans to re-do the pattern for future hoods. 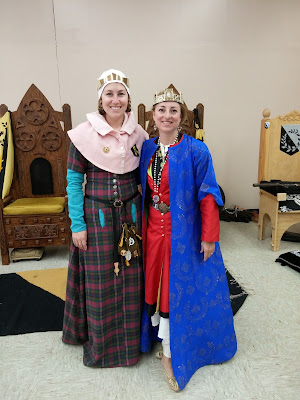