Completed Projects and Events Attended in 2016

I always enjoy reading the posts from costume bloggers about everything they made over the past year, and as I saw a few pop up this week, I decided it might be fun to make one of my own for 2016! Nearly everything you see on this post has been blogged about over the last year; you can click the links in the "archive" on the right to see them.

January saw me and the husband attend a 12th Night event in Salt Lake City. I completed a set of late 15th century Burgundian gowns for us in black chenille velvet. We didn't take any pictures at that particular event, but we have pics in the same outfits from an event later in the year. 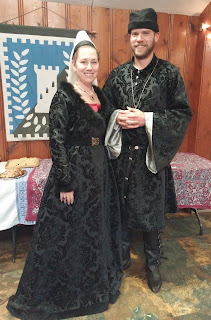 February we attended two events, the Feast of St. Valentine's with our local group, and Estrella War down in Arizona. I wore the purple and gold silk brocade 14th century gown again, but my husband's cotehardie was new: purple and black herringbone cotton flannel that mimics wool, with gold buttons, fully lined in linen, so it's nice and cozy for winter events. We drafted him a new body block pattern around this time, which helped me a lot throughout this year when I made him new clothes. 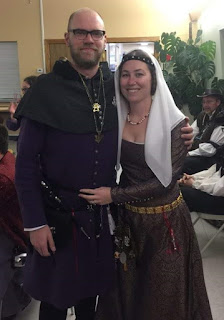 I made several new things for Estrella war, as I didn't want to bring anything from my 16th century wardrobe to such a warm event. I made a few linen kirtles, a new wool hood, and the St. Birgitta's cap. My husband got a new linen tunic and a warm surcote. 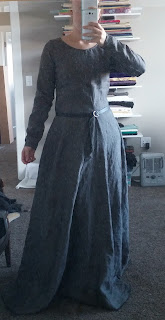 March had us attending Coronation in Idaho Falls, where my best friend stepped down from her term serving as Queen of Artemisia. I made a plaid cotehardie to wear with some items I had finished in February, a teal kirtle and a pink hood. I love this cotehardie and am looking forward to more chances to wear it. It's very comfortable, warm without making me overheat, and I think it looks great.

In April I attended Crown Tournament in Boise, and I finished a new outfit in time for that event. This outfit proved to be my post popular post of the year: a gold silk kirtle with a blue silk cotehardie over it. I'm really liking the unlined cotehardies look right now, and they assemble quickly and easily. 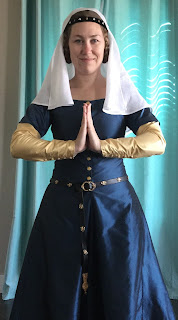 In May, we drove over to Billings for their Schola event, where I taught a hairstyles class with my friend Sarah. I had been wanting to make a fancy 14th century surcote, so I put together this outfit, all out of silk. Silk brocade lined in dupioni, with silk undersleeves. I've worn this surcote twice now, and I quite like it, even if the sleeves sometimes get in the way in the restroom! I have to be super careful when I wear it. 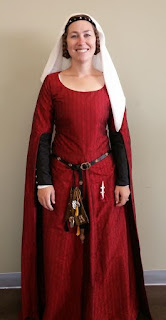 June had us making the big trip to SCA 50 Year Celebration in Indiana. I made a few new things for this event, but I didn't have to make much as I had just completed a lot of hot weather camping garb for Estrella only 4 months earlier. I did make a black linen kirtle and a white wool hood, just for more options. For hot weather, my new favorite choice is an unlined linen kirtle, in a medium to dark color so I can skip an underwear layer, as the linen kirtle itself is very washable. 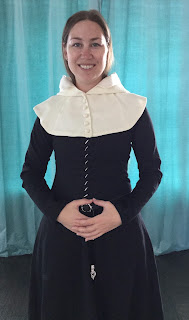 I also finished a late 15th century Italian gamurra in time for 50 Year. I wore it for a couple hours at an indoor activity at 50 Year, and decided that I made it a bit too small in the bodice. I really like it, but I put it up for sale on Etsy because I don't think I can wear it again comfortably. 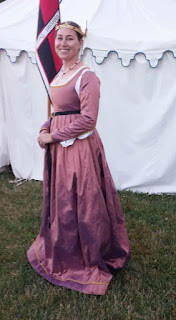 Late July had us attending Kingdom Champions in Billings. We didn't wear anything new for that event, but my husband placed 8th in the Archery competition, which made me very proud of him.
July and August had me hard at work for the Victorian Ball we attended in mid August. I made a gown for my mother and a gown and all the underpinnings for myself. This was a big project! I hope to have an event to wear the outfit to in the near future, as I'm really proud of how it turned out for my first Victorian. 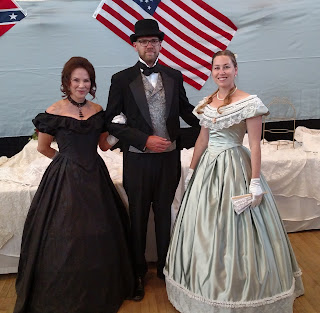 Also in August I completed a new silk cotehardie for my husband. It's a cool orange figured silk, lined in cotton, with a ton of buttons. I think this outfit is a great look on him, especially with the tall boots! 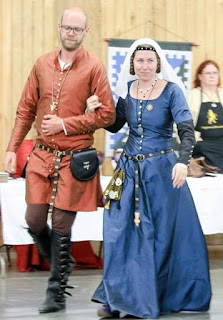 I was the event steward for a Coronation event that was held by our local group in September, with our new King and Queen of Artemisia stepping up. After this event, it was time to buckle down and get started on my projects for entering the Kingdom A&S competition to be held in November.

September and October had me hard at work on new late 15th century outfits. I haven't blogged much about them because I did some original research with the papers I presented, and I haven't decided yet how I want to get the information out there. I will give some sneak peeks of the outfits though (there's more pics on my Facebook page, see link at the top right). I'm very proud of them, but I have waited to talk about them until I feel that my research can be presented in its best light. In October we attended our little Shire potluck and we wore our black Burgundians again, and we went down to Crown Tourney in SLC, where I wore my red silk surcote. 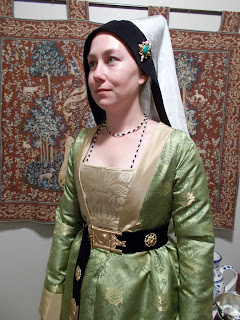 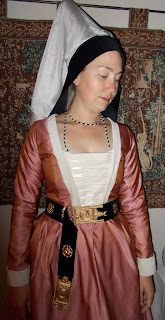 In November I attended Kingdom A&S, wearing a new 15th century silk damask kirtle during the day, and adding the green gown over it for court. I won populace choice for my display at the event, which was a nice feeling after all my hard work. I also performed a song on the keyboard as part of my entry in the competition, which I had been practicing since August. I continue to practice the keyboard so I can play at events in the future. 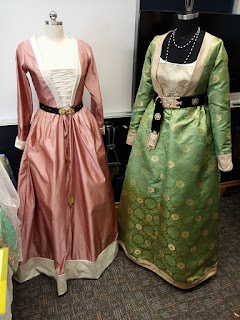 December weather prevented us from attending Solstice Court in SLC, which was a bummer, as it will be over 2 months between SCA events for me, once we attend 12th night in two weeks. I did get to attend a little Victorian tea at an historic mansion in my city. I thrifted a costume for the 1890s, which was great fun! I really want to do more Victorian and Edwardian events.

December also had me working on Regency clothes for my husband and I, for the ball we're attending in SLC in February. I've got my gown mostly done, and his shirt, waistcoat, and cravat are finished. I have also spent the last couple days researching Norse clothing, and have started a big Norse project to wear to Coronation in March.