My friend Sarah and I are starting a Historic Costume and Culture Society for our local area, the Gallatin Valley of Montana. We hope to host costumed events with themes like a Downton Abbey picnic, or a Roaring '20s party, a Turn of the Century Tea, a Regency ball, things like that. We had planned to have our first meeting at a local Victorian-decorated B&B, but it turned out that the non-profit organization that raises funds for the Story Mansion, a house built in 1910 in Bozeman, was having their annual Victorian Holiday Tea on the same date that we planned our own tea. We decided to head to their tea instead, as costumes were welcomed there. 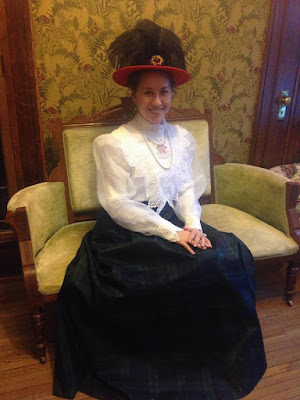 Sarah and I gave ourselves the challenge that we couldn't sew anything for this event. Why would we do that? Well, my hope was that if I can show that a passable costume for the turn of the last century could be achieved by piecing together thrifted and vintage finds, then maybe people who will want to attend our events in future can put together a costume easily if they can't sew yet. Wearing a costume, when you haven't tried it outside Halloween, is intimidating enough. If we can show that you don't have to sew to be a member of our group, then hopefully more people will be less intimidated to start coming to our events.

The theme for the tea was "Victorian Holiday", and the mansion was built in 1910. Although Victorian encompasses 1837-1901 (the reign of Queen Victoria), I personally didn't see the point of wearing something from before 1890 or so, due to the time period that the mansion was built being a bit far off from true Victorian. I settled on the 1890s, so that it would still be technically Victorian, but not too many decades away from the Edwardian time period that the house was built. Sarah decided on the 1910s when she found an original Edwardian tea dress at an antique store in town. 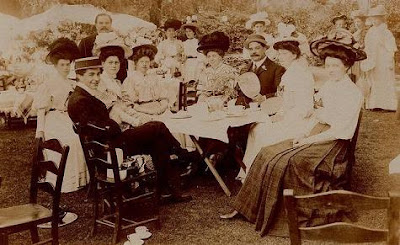 The photo above is the look I was going for. Notice the woman on the right? She's wearing a plaid skirt, white blouse, and a medium-to-large sized hat. When I came across a tartan skirt, I realized I could replicate her outfit pretty well.

I bought all of my items online, from Etsy and Ebay. Shown below are the listing photos. 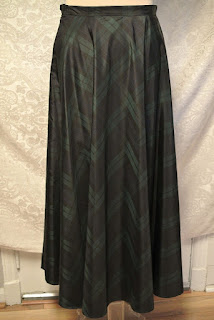 The skirt is silk taffeta in a blackwatch plaid, and right about my size so I didn't have to alter it. It's Talbots brand, probably not very old, but I got it on Ebay for about $40. 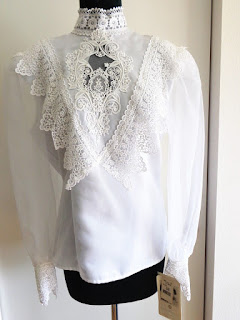 The blouse is vintage Scott McClintock, from Ebay, maybe late 80s or early 90s? The lace on the blouse is the show stopper. The fabric is a chiffon, and while a cotton blouse would be more historically accurate, I couldn't pass up the amazing lace. It buttons up the back and at the wrists, like many blouses from the 1890s. It was $30. I did wear a long-sleeved linen chemise under the blouse, as the sleeves were totally sheer without it. 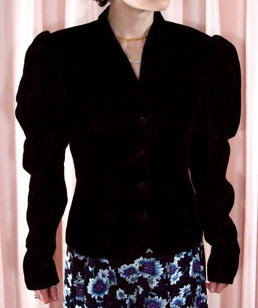 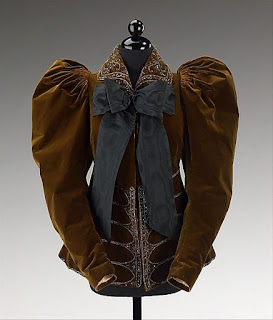 The jacket is black rayon velvet, also vintage Scott McClintock. It buttons up the front with some nice jet-style buttons. Only $20 and it fits great! I thought the main style of it looked a bit like this extant 1890s jacket from the Met, with less dramatic sleeves and collar, of course! Hard to buy a jacket like that off the rack these days...

The hat is red wool, and it came decorated with the black tulle and plaid rosette. I thought it would look Christmas-y with the green skirt. I added some black ostrich feathers and a red and gold brooch from my stash to make it feel more old-fashioned. It was $30. I found some very fabulous Victorian hats online, with the great feathers and flowers decoration, but they were closer to $100 and I wanted to stay low-budget for this event. 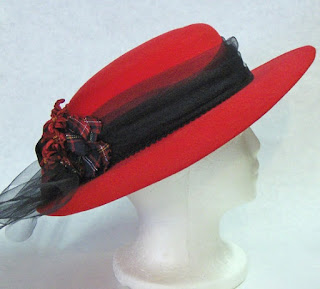 The shoes are probably from the 1990s, I picked them up a couple years ago at a local thrift store, thinking they could pass for Georgian in a pinch, but they are better suited for late Victorian. $4! 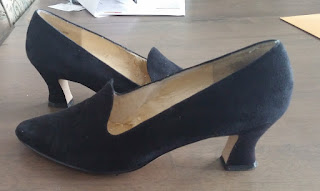 The belt is one I made last year, black velvet with a gold metal buckle. I wear it with my 15th century Burgundian outfits, but it worked perfectly for Victorian, too! A fabric sash would have done fine as well. Pearl necklace is my own, the pearl earrings were a gift from my best friend. 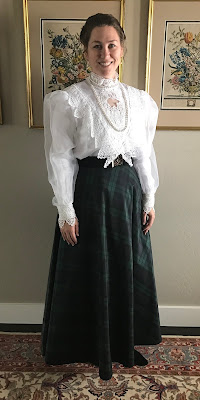 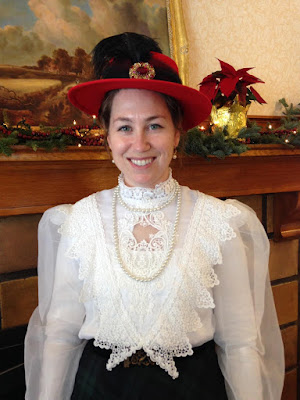 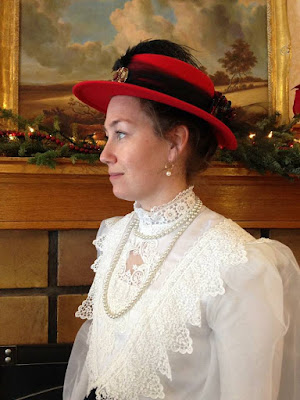 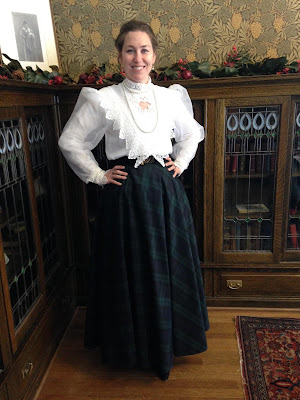 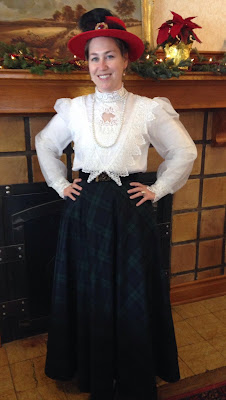 Here is Sarah in her original 1910s tea dress. It's in pretty great condition despite being probably around 100 years old. It fit her very well, and with her hair and makeup done like they did back then, she looked very historical. 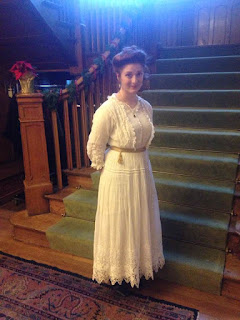 Email ThisBlogThis!Share to TwitterShare to FacebookShare to Pinterest
Labels: Victorian