Fun at the Museum

For those who don't know, I intern at a decently-sized museum in Bozeman, MT. I get to work in collections management, which means handling historical stuff and entering items into a database. Sometimes, fun projects come along! For example....

A collection of historical fashion dolls made in the 40s-50s by the home ec department at the university I attend! I got to write up their descriptions and put them away for permanent storage. Here's just a few to have a laugh over.

1. She came with a card titled "Middle Ages Gothic Period", which is obviously wrong, but there's apparently another card floating around the collection saying Tudor or English or something like that. I think the student that made this did her research!

2. Here's "19th century American". The fabric was super cute, and well sewn, but the pattern is rather modern- notice the bust darts?

3. This one is marked "Queen Elizabeth". Look at the ruff set! Epic! 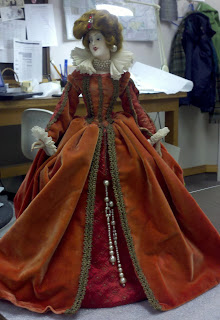 4. Here's 18th century. She even had wire panniers, but they were smushed from years of sitting in a box. 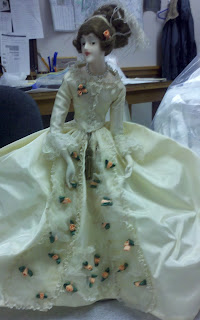 5. This one is marked "Marie Antoinette" but is actually a good very early 17th century outfit with the wrong wig. Notice the light damage- the gown is ivory now but was originally bright pink! Many of these dolls were put in a glass case for display for many years in direct sunlight. 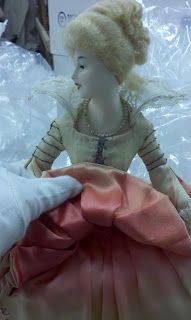 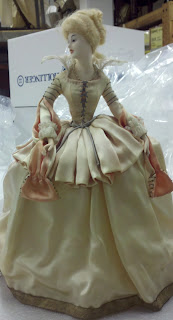 I have a pretty sweet internship :)
Posted by Jane at 5:54 PM