Here's a post on an outfit I just finished for a new SCA member who lives a few hours away. She joined a few months ago and is going to Talon & Crescent War in February, and she needed some more garb, for that event and for the future as she hasn't yet learned to sew. I figured this dress would be able to see her through a couple years of events before she learns to make her own. She is wanting the kampfrau/landsknecht style, which I had never done before, so this was certainly new territory for me, bodice-wise.

This dress has a long history with me. When I first joined the SCA in 2008, I was set on never bothering to learn how to sew- my plan was to just pay professional costume seamstresses to custom-make me outfits. I didn't think I'd ever be capable of sewing anything other than a button! I came across a costume seamstress online, and she ended up making me several garments: two Tudor gowns, a fitted English overgown, and this dress- an English kirtle. I supplied the fabric, a light green cotton sateen, and she made it from my measurements. I probably wore this dress a total of five times, as it wasn't too long before I started sewing for myself. I sewed on the red velvet trim. 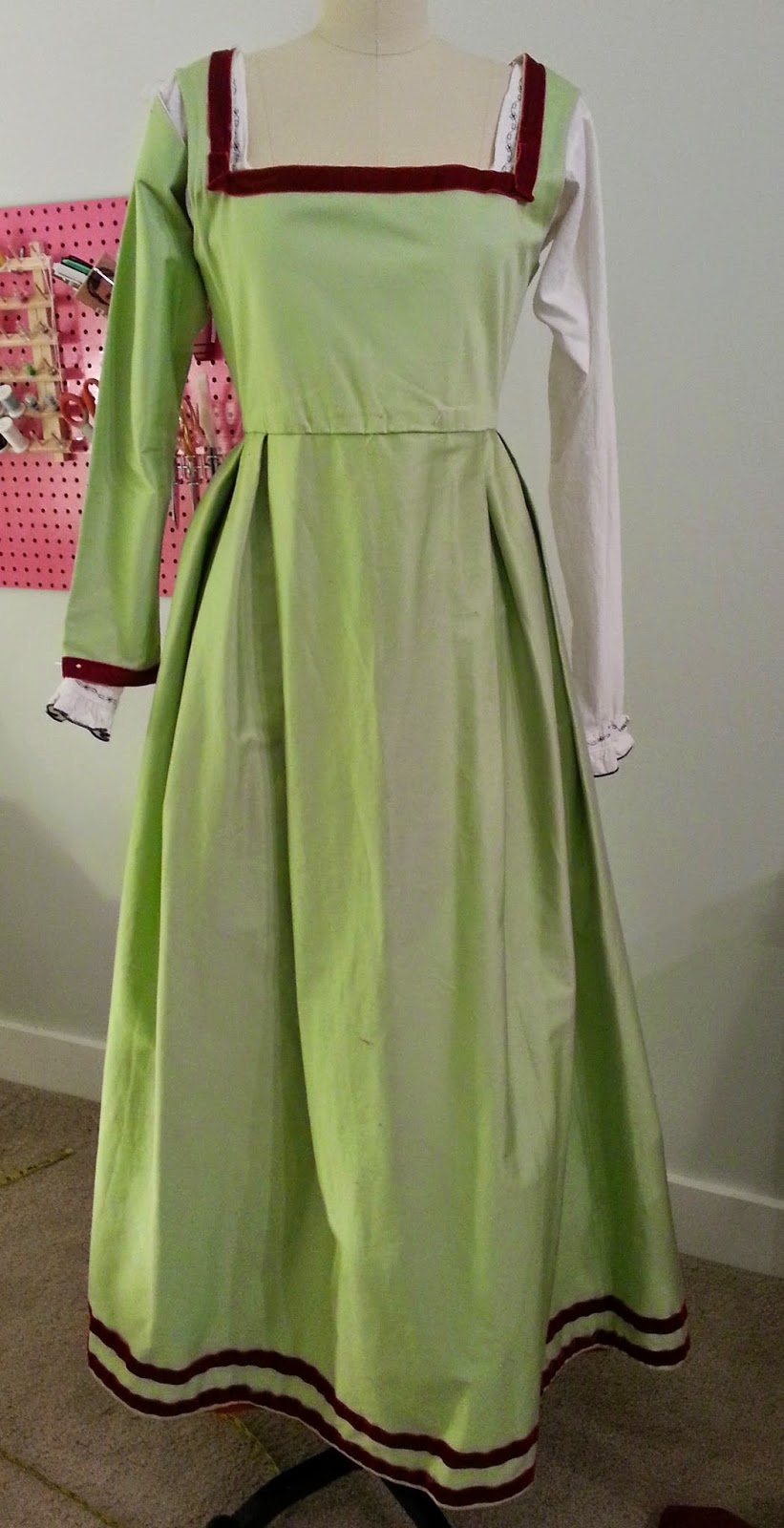 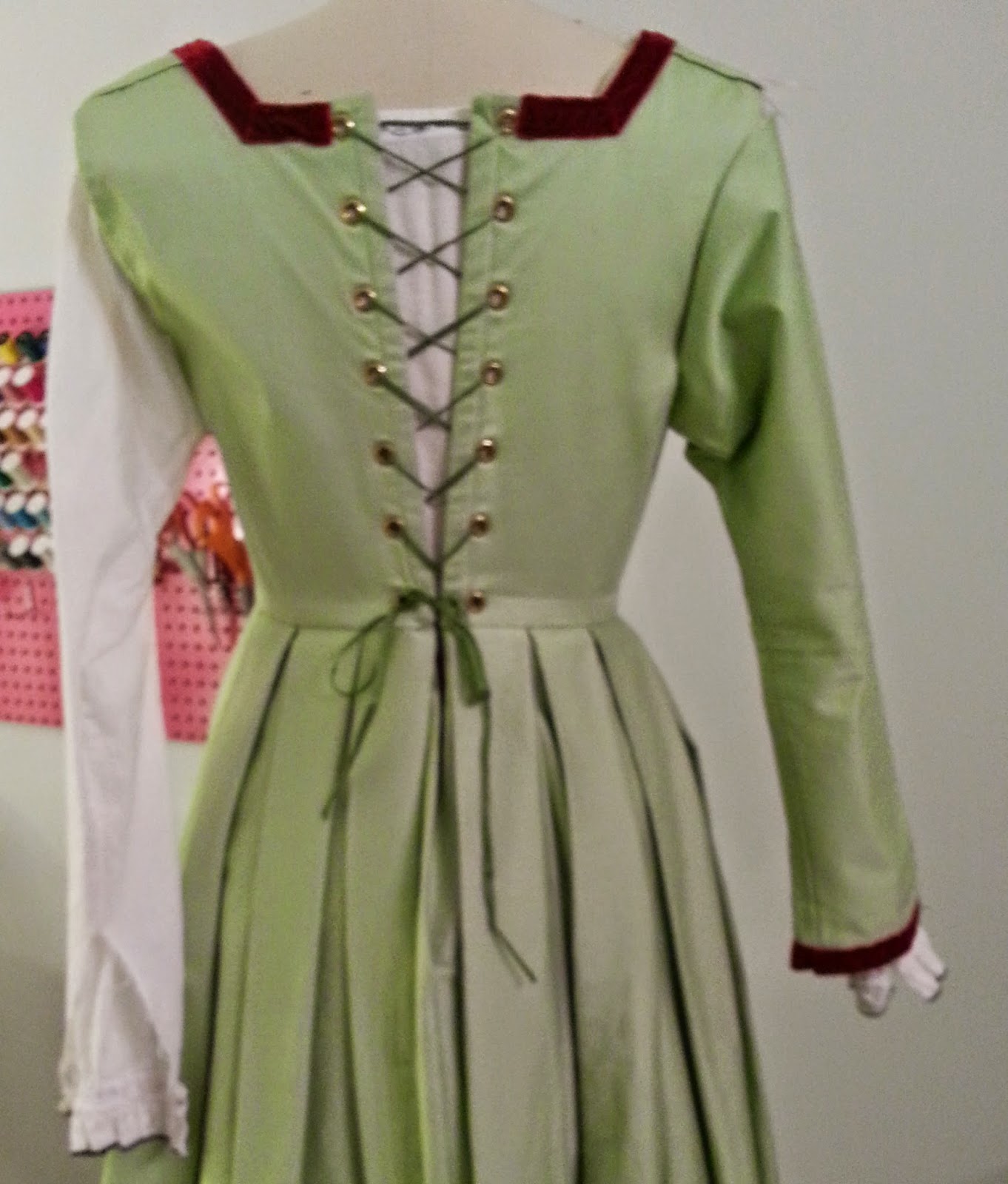 Fast forward a couple years. The dress has been sitting in my extra garb closet (for non-SCA costumes or stuff I don't wear anymore that needs a new home). I hear from the new SCA gal that she needs some costumes, so I try on the old kirtle (that was still in great shape as I had only worn it a few times) to see how it fits, as the gal is only 1 inch bigger than me in bust and waist. The original plan was that I would hem it for her (as she's 8 inches shorter than me) and send it as is. Well, there were some spots on the bodice that needed cleaning. I decide to throw the whole thing in the washing machine. Skirt and sleeves turn out clean, no problem. The bodice, however... shrunk, a lot. The pro seamstress who originally made it never prewashed any of the fabric. The canvas lining shrunk terribly, and the fashion fabric did not shrink, so the bodice was now an unusable disaster. Time to start over!

I made a totally new pattern for the bodice, using her measurements. I tried it on a bit during the process, just making it a tad loose for me, but shorter and with a smaller armscye. Another new thing for me was trying the German rolled pleats which are commonly seen on the landsknecht and kampfrau garments. About two thirds of the skirt has rolled pleats, the front few is regular knife pleats. I love how they turned out! 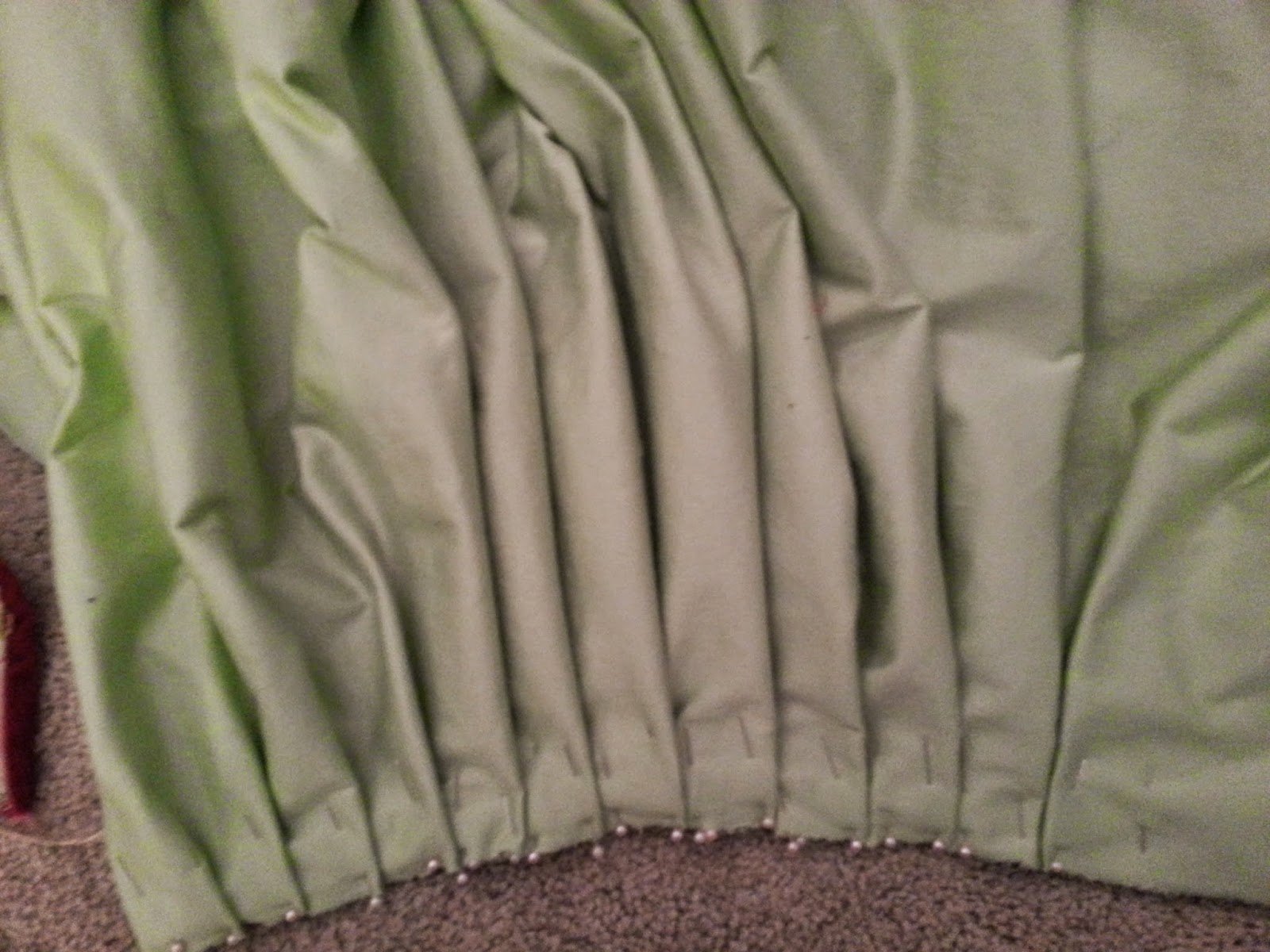 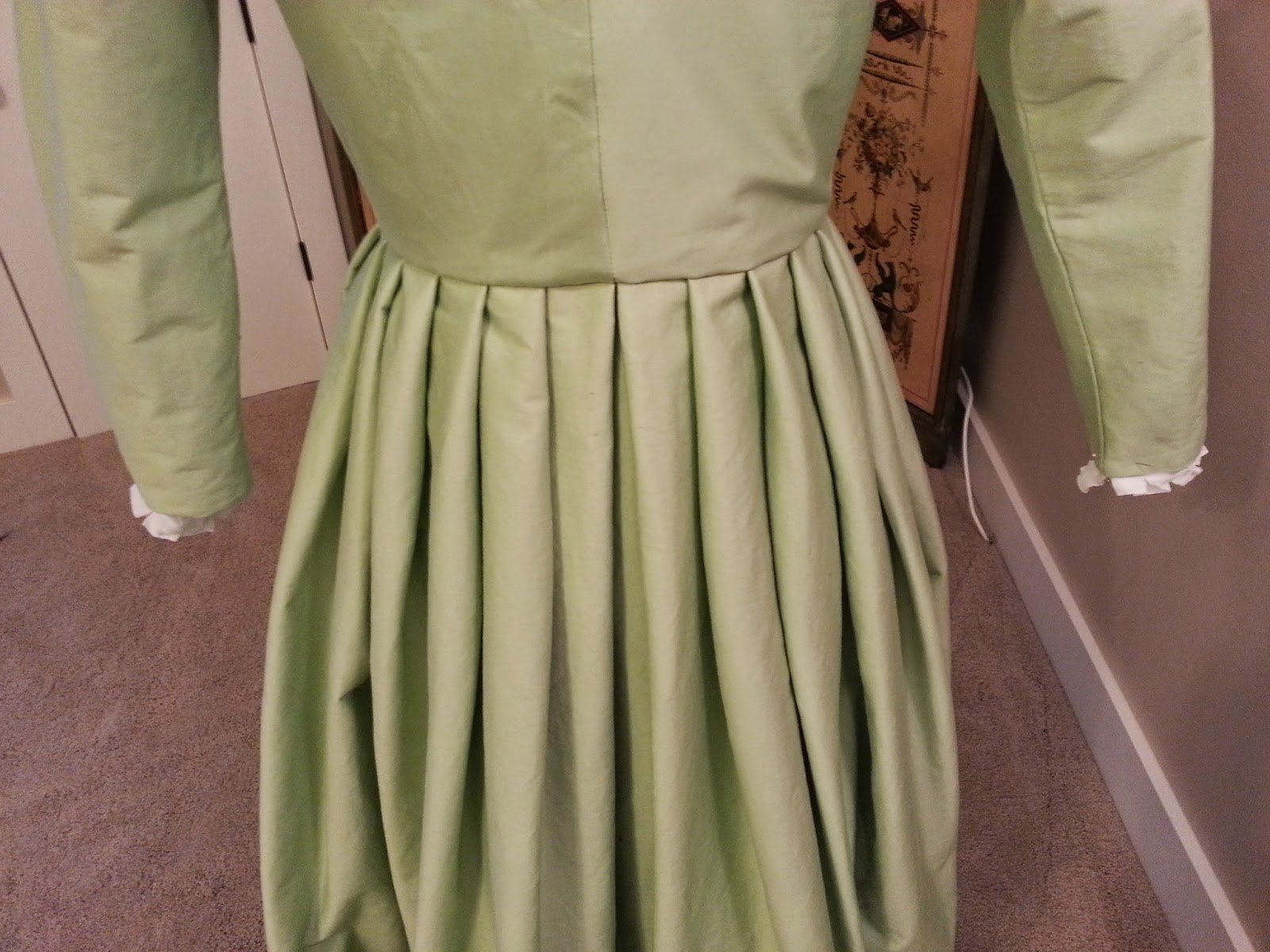 The front fastens with ten little lacing rings. The trim is sewn on the front and then whipstitched to the inside of the bodice. The sleeves tie on with lacing rings and ribbon. 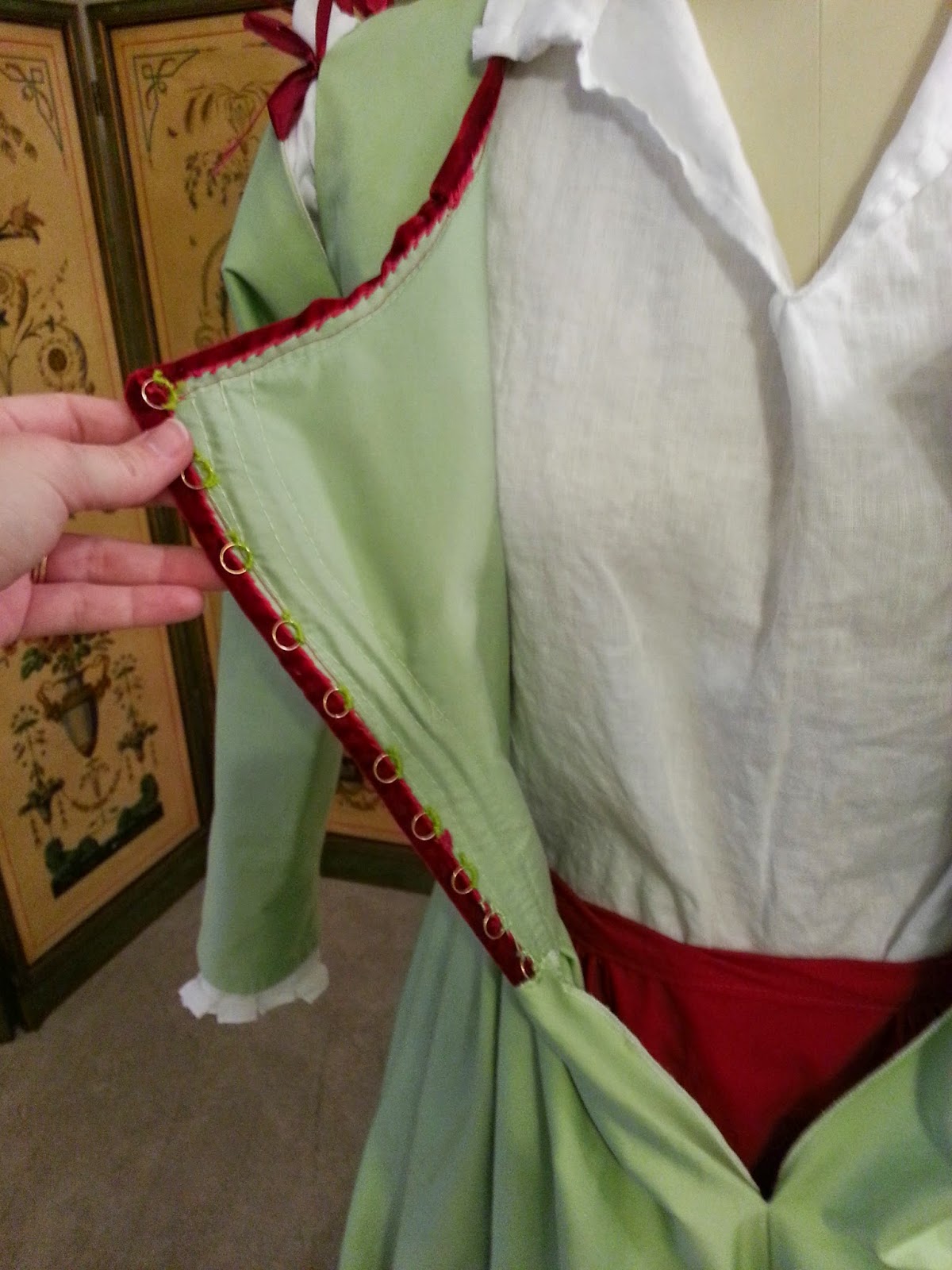 For the photos I added an English shirt, as the gal didn't need an underdress with this outfit, and all my smocks are low necks. So shirt is just for pictures! 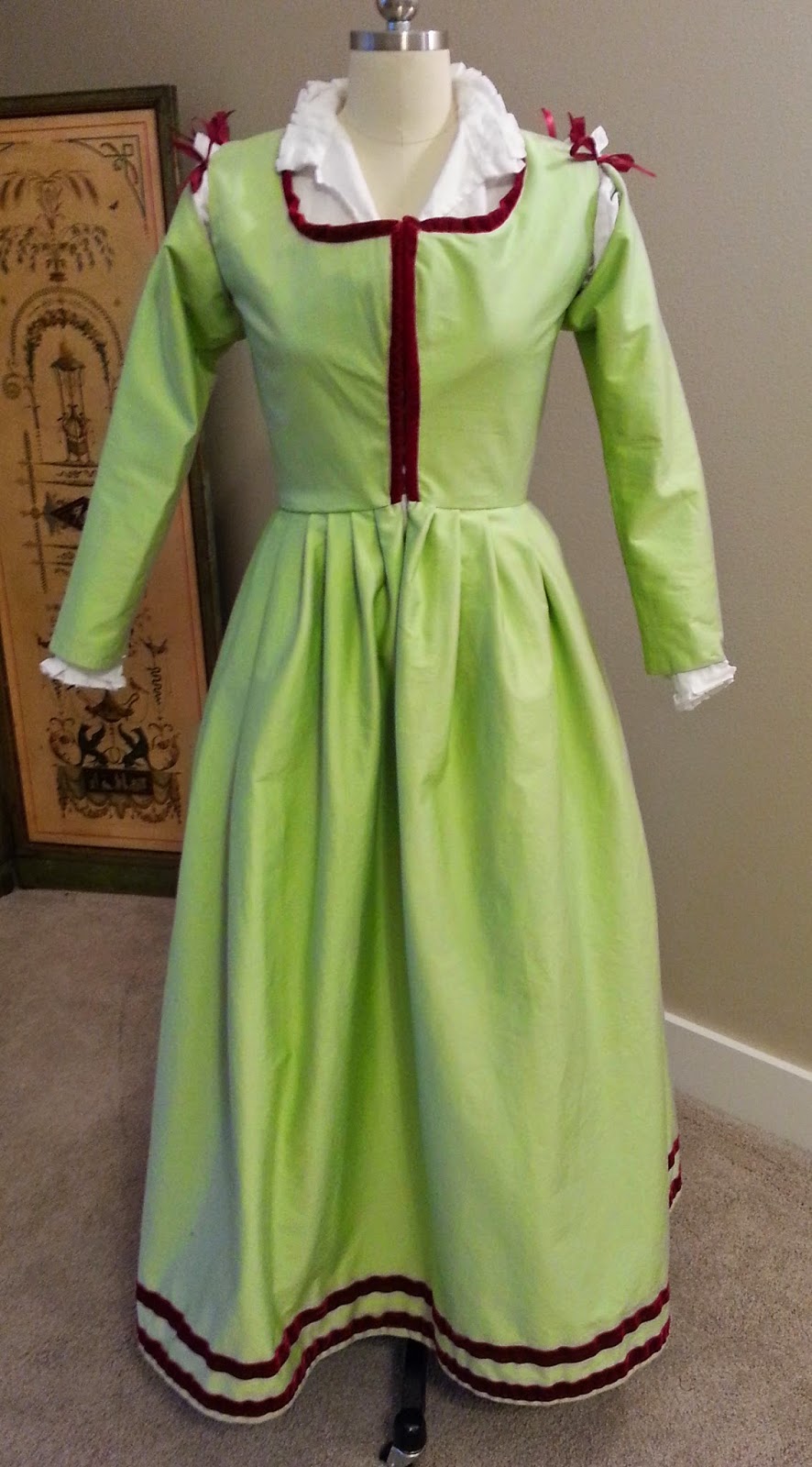 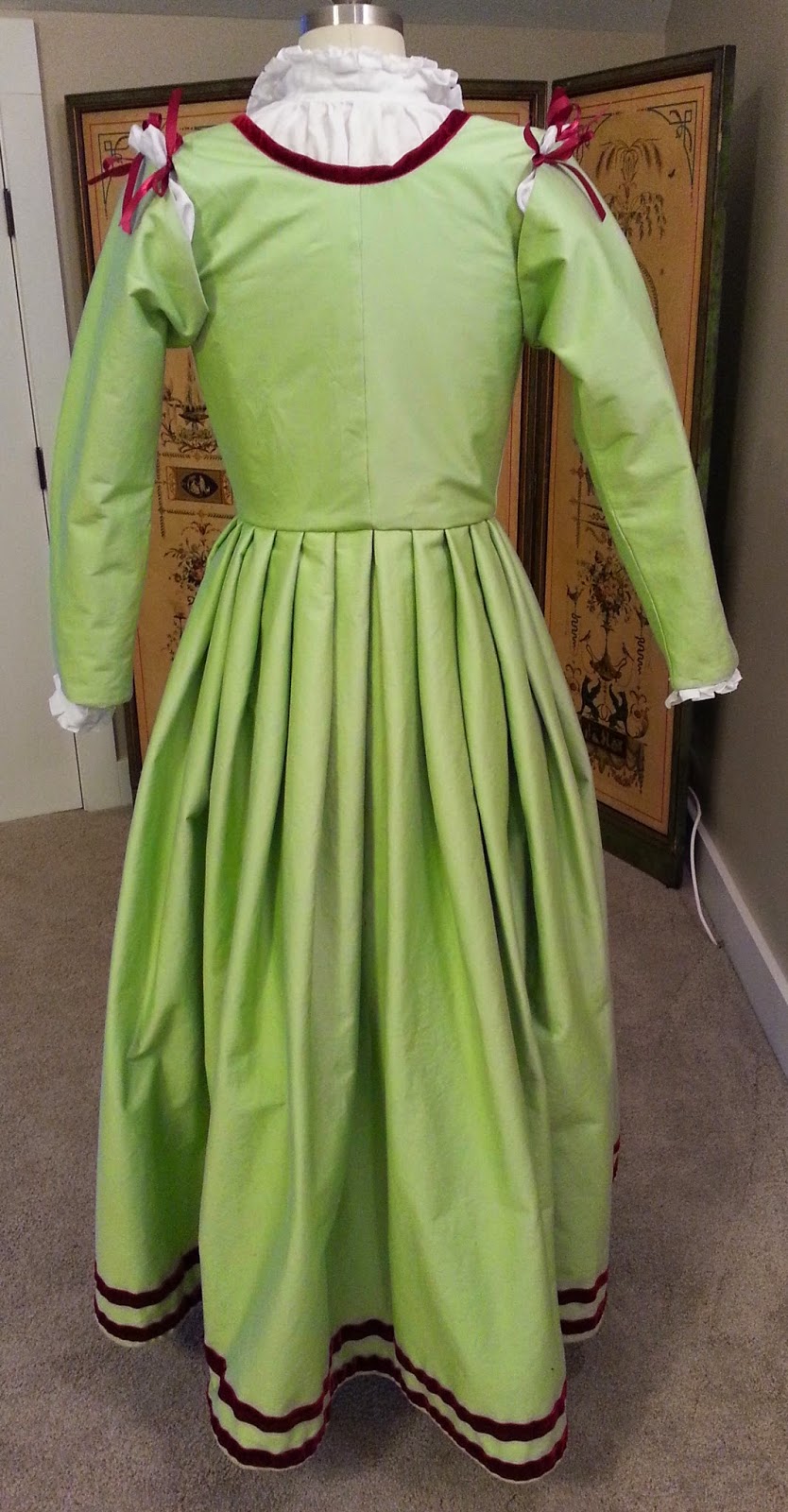 She also got a corded petticoat out of the deal! I had made myself a red corded petticoat a couple years back, and I never wore it, as the waistband was too thick. I took off the waistband and made a new one to her size, and added a hook and eye instead of the former button that was there. Plus it lost several inches in the hem length! One thing I did unusually for both the petticoat and the dress was in the hemming: instead of cutting off several inches from the skirt bottom, I detached the pleated fabric from the waistband and bodice, cut off inches from the top, and repleated it to the waistband and bodice. Not necessarily easier, but enabled me to clean up the pleats and re-do them.